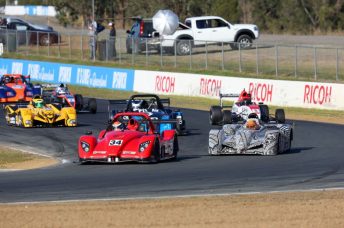 The Australian Prototype Series will debut at Sandown

At least 14 cars are set to take to the grid for the first ever round of the Australian Prototype Series at Sandown in April.

Five different manufacturers are represented, including the pair of Wolf GB08 Tornado CN Prototype entries entered by Synep Racing – the first of their kind to race nationally in Australia.

New South Wales brothers Josh and Adam Cranston will steer the pair of Synep Racing entries, upgrading from several seasons of competition in the FL1 Open Wheelers that are a mainstay of the class.

Josh Cranston will run in the outright P1 category and is expected to face championship competition from Jason Makris (West WX10) and Mark Laucke (West WX10).

Adam Cranston will also be eligible for the P2 Kumho Cup, a class within the category determined by driver seedings.

There will also be a separate class for the several Radicals which will run in the field at Sandown.

Round 1 will be run over three races on the Shannons Nationals Program from April 7-9.