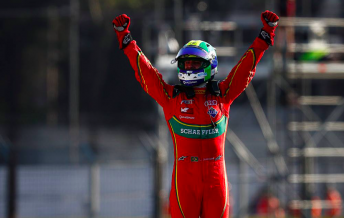 Lucas di Grassi ignited his FIA Formula E Championship hopes with a stunning come from behind victory in an incident-filled race in Mexico.

The Brazilian managed to leap from last to first after gambling on a Safety Car which helped pave the way for his first win of the season from Techeetah’s Jean-Eric Vergne and Virgin Racing’s Sam Bird.

New Zealand’s Mitch Evans scored a career best fourth for Jaguar Racing having benefited from a crash in the closing stages of the race.

Di Grassi was demoted to the rear of the field when he suffered damage to his rear wing which prompted the ABT driver to pit on lap three.

He then choose to pit and swap cars under the Safety Car with 28 laps to go, after leader Oliver Turvey came to a halt at Turn 1 of the Autodromo Hermanos Rodriguez circuit.

Once the mandatory stops had shaken out di Grassi found himself in the lead which he held until the chequered flag.

Jerome d’Ambrosio had mirrored di Grassi’s strategy and was lying second after the stops and provided a stern defence against attacks from Jose Maria Lopez and Vergne behind.

This allowed di Grassi to open up a healthy lead at the front.

Lopez suffered a spin putting him out of the fight just before Vergne eventually found a way by d’Ambrosio.

Despite strong pace, Vergne was unable to reel in di Grassi and had to settle for second ahead of Bird, who took advantage of d’Ambrosio running out of energy.

Evans’ charge to fourth was aided by a multi-car collision involving Nico Prost, who hit Nick Heidfeld, which also saw Felix Rosenqvist become caught up in the incident.

The Kiwi swept through the carnage to claim fourth while Prost recovered to fifth in front of Lopez (Virgin Racing), Daniel Abt (ABT), Adam Carroll (Jaguar Racing), Nelson Piquet Jr (NEXTEV) and debutant Esteban Gutierrez (Techeetah).

The FIA Formula E Championship heads to Monaco for the fifth round on May 13.