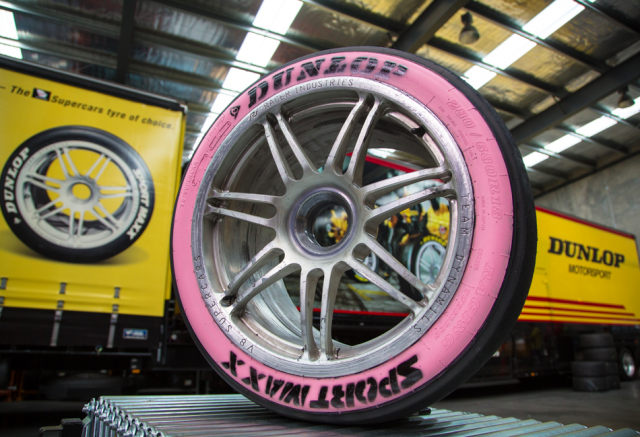 UPDATE: Speedcafe.com hopes you enjoyed our below story for April Fools day for 2017.

Dunlop will trial a new concept to help fans identify the current leader of the Virgin Australia Supercars Championship at Symmons Plains in Tasmania next weekend.

The Supercars control tyre supplier has been developing a new system which will see the side walls of the tyres painted in a specific colour to denote the championship’s points leader.

Dunlop’s move follows a similar initiative from Supercars who have been evaluating options to highlight the championship leader to supporters both at the circuit and on television.

The championship trialled using purple numbers on the windscreen and windows, instead of the traditional yellow, on Shane van Gisbergen’s Red Bull Holden Racing Team Commodore during first practice at the season opening Clipsal 500.

However, the latest concept from Dunlop will see the championship leader offered 24 choices of colours for the tyre sidewalls.

The range will allow teams to co-ordinate colours with liveries and sponsors.

Following extensive secret testing Dunlop has developed a procedure where tyres can be repainted in a matter of moments during a race weekend if the championship leader changes.

If deemed successful, it is hoped the championship’s top-five will be asked to nominate their tyre colour of choice two weeks before a championship round to enable Dunlop engineers to prepare pre-mixed batches of paint.

Once a driver’s tyres are allocated on a race weekend they will be immediately painted and given 15 minutes drying time before they are released to the team.

The paint has been secretly tested for several months and works faultlessly with Dunlop’s new construction tyre in all weather conditions, according to Dunlop’s Supercars Operations Manager, Kevin Fitzsimons. 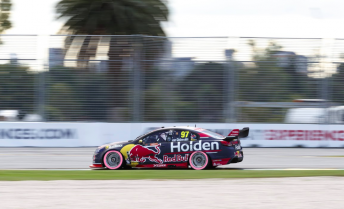 “The paint has been in development by our Dunlop engineers for many months and it is great that we will have the opportunity to debut it at Symmons Plains next weekend,” said Fitzsimons.

“The performance and durability of the new Sport Maxx tyre has been terrific and has added to the Supercar spectacle.

“We always need to be looking for innovative ways to add to the show for the fans and I think this will do it.

“The paint can be applied on site, so if the championship lead changes during a weekend we can dissolve the paint on the tyres of the former leader and paint the Dunlop rubber of the new front runner between races.

“We have had to build some infrastructure to be in a position to change up the tyres on the run at a race meeting, but it will be worth it.

“Our engineers and technicians have a developed a special drying agent which allows the entire process to be completed in less than 15 minutes.

“We have been testing the paint on the tyres for quite a while, but ran it on the inside sidewall so that we could see how it stood up.

“We have even developed a process where in the case of night races we can add a glow-in-the-dark agent to the paint.”

Championship leader van Gisbergen is supportive of the idea and has chosen pink as his colour of choice for the concept’s debut.

“I think it is a great concept,” said van Gisbergen, who picked up a maximum 300 points with two race wins at the Clipsal 500 in Adelaide last month.

“The fans will have more of an idea of what is going on both at the track and on TV.

“Hopefully I will be in the championship lead when we head to round three at Phillip Island and I can choose another colour for that round.”

The concept is expected to break cover for the first time at the Tyrepower Tasmania Super Sprint at Symmons Plains from April 7-9.