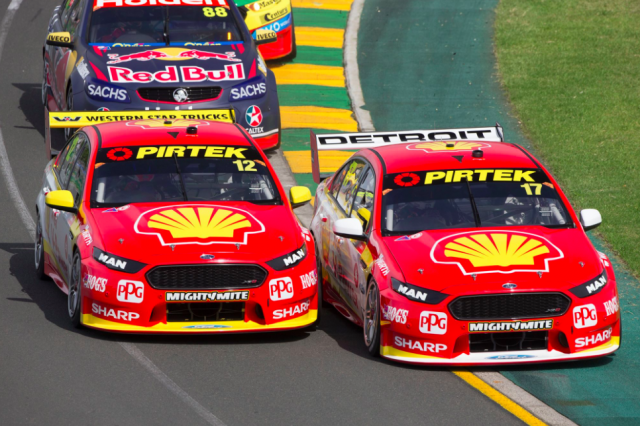 DJR Team Penske is keeping its expectations in check ahead of next week’s Tyrepower Tasmania Super Sprint following a dominant showing at the Australian Grand Prix.

The operation has emerged as a genuine championship challenger after showing impressive pace at the Clipsal 500 which was then backed up by three victories from four races during a breakthrough weekend at Albert Park.

Such performance has signalled the team’s intentions for the remainder of the season, although the visit to Symmons Plains is likely to prove an acid test having struggled at the Tasmanian circuit in recent years.

The squad has scored one top 10 finish in the last five races at the venue.

Buoyed by the strongest start to a season yet by the Australian/American alliance, managing director Ryan Story is refusing to let complacency creep in at the Queensland team.

Story has also confirmed to Speedcafe.com that the team’s truck left the workshop last night and is en route to Tasmania having successfully battled flood waters caused by ex-Cyclone Debbie.

“The cold hard reality is, and this is known to many, we are still not at the pinnacle by any means,” Story told Speedcafe.com.

“We have still got a long way to go to replicate and compete at the front week in week out.

“We have got a couple of challenges ahead of us. There is not too much back slapping going on at Stapylton at the moment.

“We are going in with no expectations and we will try and do the best job we can.

“I don’t think there is any pressure on us in that respect.

“We are just hoping to improve upon what happened last year and hopefully we can have both of our cars competitively in the top 10 or better then we will walk away happy.”

Following Albert Park, Red Bull HRT driver Jamie Whincup has claimed the team has all of Triple Eight’s secrets at its disposal after its former technical guru Ludo Lacroix joined DJRTP in the off-season.

Scott McLaughlin responded to the comments by stating that DJRTP is firmly in the minds of the drivers and staff at Triple Eight.

Meanwhile, Story says the reaction to his team’s results hasn’t proved to be a distraction for his squad heading into Tasmania.

“We will let our result do the talking and hopefully we can press on,” he added.

“It is certainly not something that has distracted our guys. We will let that play on as it is.

“We have got a renewed focus and I’m proud of our guys.

“We will keep chipping away at it and we are not taking anything for granted. We need to keep working hard.”