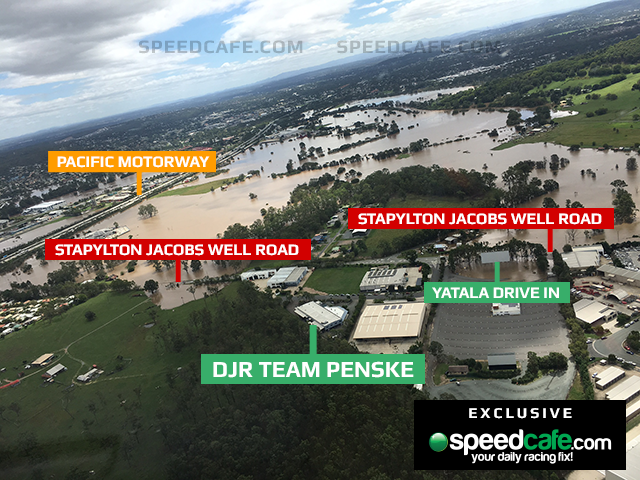 DJR Team Penske remains confident its travel plans for next weekend’s Tyrepower Tasmania Super Sprint will be unaffected despite floods hitting the area around their Queensland workshop.

The Shell V Power Racing Team transporter is expected to leave tomorrow morning although the operation is likely to face the challenge of navigating flooded roads.

Only essential staff have made the trip to the workshop today given the conditions.

However, the team remains confident its truck will still arrive in Melbourne to meet its boat transfer to Launceston,Tasmania on Monday.

If conditions fail to improve there is an opportunity to make a secondary crossing of the Bass Strait on Tuesday afternoon.

“At this point in time we are still on target for the truck to leave tomorrow (Saturday) morning,” DJR Team Penske communications spokesman Ben Nightingale told Speedcafe.com.

“If the worst case scenario hits, there is another boat on Tuesday we can make, but at this stage we are confident we will make the boat on Monday.

“It has put us half a day behind but we will see how it plays out.

“Our thoughts goes to all those that have been affected by Cyclone Debbie and we hope everyone stays safe.”

Tekno Autosports also, based in Yatala, faces a similar task, while Triple Eight is aiming to travel from its Brisbane base tomorrow.