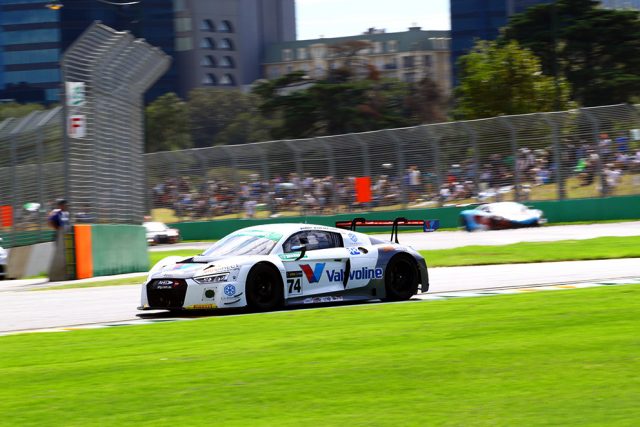 Audi factory ace Kelvin van der Linde is closing in on a drive in next year’s Bathurst 12 Hour, after plans to tackle the 2017 edition of the endurance classic fell through.

The South African has impressed so far despite a frustrating debut in Adelaide, taking out the most recent round at Albert Park. Set to be a regular fixture in Australian GT this season, Van der Linde confirmed to Speedcafe.com that Jamec Pem are working on signing the 20-year-old for next year’s Bathurst 12 Hour.

“At the beginning of the year it was actually planned that I was going to be driving (the Bathurst 12 Hour) with Jamec Pem,” van der Linde told Speedcafe.com.

“Unfortunately, I had some issues regarding visas and it was a very last-minute deal, so we couldn’t pull it off for Bathurst but I’m happy we got to pull it off for Australian GT.

“I feel like we’re working well as a team so why not push for that for next year? I think it’s very likely.”

Van der Linde will also continue to fill the pro-driver role in the #74 Valvoline Audi R8, subject to overseas commitments for the German marque.

The Phillip Island 101 clashes with the Nurburgring 24 Hour, which van der Linde will contest, on the weekend of May 27-28.

Audi recently confirmed that van der Linde will partner Markus Pommer for his fourth season in the ADAC GT Masters Championship, which he won in 2014.

“We have some clashes during the season with my other European commitments but generally the full season is planned,” he added.

“I think there’s one clash in Phillip Island for the first enduro round but after that it’s planned to do the full season because obviously I need to support Geoff and it’s nice to have a fixed combo.”

Van der Linde took pole on his Australian GT debut at the Clipsal 500 but experienced a frustrating weekend thereafter, incurring penalties in each of the first two races and then being caught up in an early-race incident in Race 3.

However, he and Emery took out Round 2 at the Australian Grand Prix, van der Linde winning both his races under the unique weekend format.

“It was nice to have a clean weekend,” he reflected.

“Adelaide was a bit disappointing with a few mistakes from my side.

“We got a stupid penalty for weaving under the Safety Car, so in that sense it was a bit of a learning weekend for me, and (at Albert Park) just managed to iron out all the mistakes and it paid off.”

Van der Linde will be next in action at VLN2 on April 8, while the Australian GT Championship continues with Round 3 at Barbagallo from May 5-7.