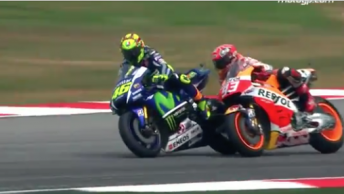 MotoGP has abolished the penalty points system with immediate effect, following a meeting of the Grand Prix Commission in Qatar.

The commission decided that the penalty points system, introduced in 2013, was “no longer necessary” due to a range of other disciplinary options which are available at the discretion of stewards.

Those punishments, such as grid penalties and withdrawal of championship points, existed alongside the penalty points system.

“Taking into consideration that the FIM MotoGP Stewards have many penalties options, the penalty points were no longer necessary,” read the Decision of the Grand Prix Commission issued post-Qatar.

“The Grand Prix penalty points are now withdrawn from the list of penalties.”

Valentino Rossi most notably fell foul of the penalty points system when he was sent to the rear of the grid for the season-ending Valencia Grand Prix in 2015.

The Italian had been issued three penalty points for kicking Marc Marquez off his bike in Malaysia, which saw him reach the four-point threshold for the punishment.

That application of penalty points was dropped last year, with only the one-race ban for an accumulation of 10 penalty points still active until the commission’s withdrawal of the system in Qatar.

Next Story VIDEO: Sky's the limit for Miller