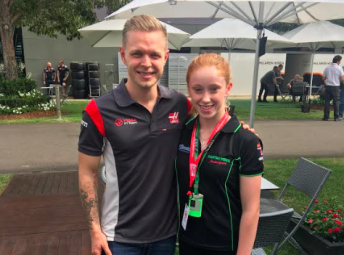 The Sonic Motor Racing Formula Ford driver was invited for a tour of the Haas F1 team during the F1 season opener at Albert Park last weekend.

The 15-year-old from Melbourne was able to witness the F1 team in operation first hand as she watched on from the garage as the American squad conducted its duties in practice.

After the session, Haas F1’s new signing Magnussen shared his experiences of climbing up through the junior ranks with the teenager.

Prince, who is competing in her maiden full season in Australian Formula Ford, was grateful for the opportunity, which she believes has further motivated her to rise up the ranks.

The teenager was also invited for a brief tour of the DJR Team Penske garage during the weekend.

The tour was organised through her sponsor Alfex CNC, the Australian distributor of Haas products. 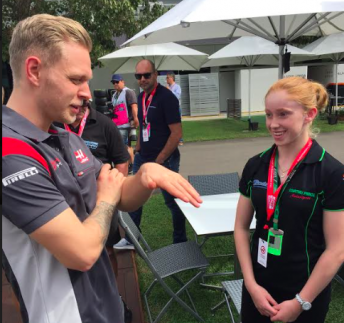 “It felt pretty good because F1 is where I want to go one day,” Prince told Speedcafe.com.

“It is great to communicate with the F1 drivers and get some tips and learn more about their experiences.

“It was really good and for a big F1 team to want me in their garage was great.

“I spoke to Kevin about Formula Ford and how he went from that up the ladder and his advice to me was ‘what you put in is what you get out’.

“It motivates you more to move towards that ultimate goal.

“The team is very professional and everything is in order and so organised. It is amazing how they operate.

Prince will head to Wakefield Park this weekend for the second round of the Australian Formula Ford Series.

Next Story Lakeside closed due to Cyclone Debbie flooding