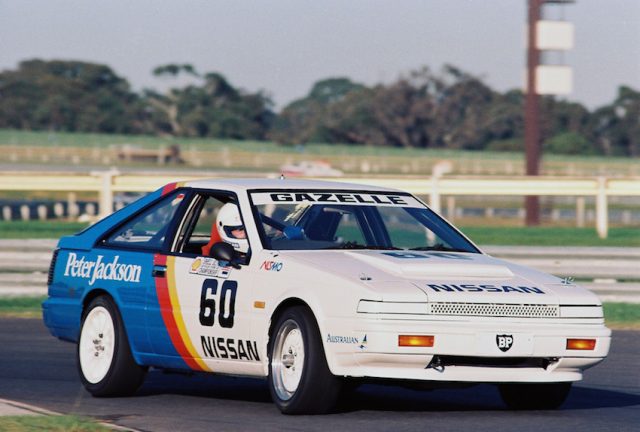 Mark Skaife at Sandown in 1987

Today’s AN1 Images Memory Lane takes us back to the very genesis of Mark Skaife’s glittering touring car career.

The date was the 7th of June 1987 and our photo shows a 19-year-old Skaife making his Australian Touring Car Championship debut behind the wheel of the Peter Jackson Nissan Racing team’s Group A Gazelle at the Sandown round of the ATCC.

The Gazelle competed in the two-litre class yet Skaife managed to bring the car home in 12th position outright after starting in 23rd position on the grid and beat home an angry pack of factory Toyota Corollas, helping Skaife on his way to claiming the two-litre title.

Skaife was later moved up to 11th overall in the final classification after the OXO Sierra of the late John Giddings was excluded from 11th place by virtue of his team receiving a one month suspension after the Amaroo Park round for non-homologated turbo components.

Skaife also took line honours in the Two-Litre Touring Car Championship race that ran concurrently within the Sandown round, with championship points awarded for that contest after 13 laps of racing had been completed within the 30-lap distance of the ATCC race.

It’s certainly a format that many would have forgotten about – and thankfully isn’t one we have to deal with anymore!

The race was a good one for Nissan as its pair of Skyline DR30s claimed a 1-2 finish.

George Fury (who had led the first 29 of 30 laps) moved over on the last lap to let young gun team-mate Glenn Seton by to take maximum points given he was fighting for the title and there were only a handful of rounds.

However no one was able to actually see this result unfold, industrial action meaning Channel 7 was unable to televise the race – what a nightmare!

The following year Skaife was given his first opportunity to step up into the outright Skylines – which by then were the HR31 ‘GTS-R’ model.

The rest, as they say, is history…