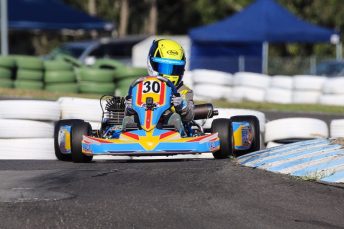 Erebus Motorsport has announced that it will support rising star Jobe Stewart in the 2017 Australian Kart Championship.

The 12-year-old has joined the Erebus Academy after being awarded Rookie of the Year in his debut Australian Kart Championship season last year.

After racing in the Cadet 12 class, where he finished seventh in the championship, he will now step up to the KA4 Junior Light category.

“I’m excited to be a part of the Erebus Academy and for what the future holds, I am very grateful for the opportunity” said Stewart.

“Jobe already has a wealth of knowledge and clearly has the potential, with the right guidance and given the opportunity, to make a mark,” said Ryan.

“Having guidance from someone as experienced as James certainly brings comfort in knowing Jobe can just drive the kart and race to win.”

Stewart spent time as a guest of Erebus Motorsport in the team’s garage during the Clipsal 500 Adelaide in early March.

Stewart finished 14th in the KA4 Junior final in Newcastle In February.

The next Australian Karting Championship meeting will be held in Geelong from March 31-April 2.