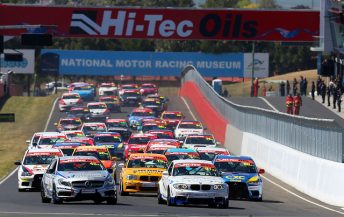 The start of the 2016 Bathurst 6 Hour pic: Nathan Wong

The move harmonises eligibility regulations for all CAMS production car categories at national and state level.

Group 3E regulations stipulate that cars must be certified for road use in Australia, be subject to a list price less than $150,000, and have a minimum 100 units registered in Australia.

“Opening up the Series to all 3E production cars at a value of less than $150,000 is another huge step for us this year,” said category manager Iain Sherrin.

“This will see us able to be fully inclusive to all production cars that fit within the CAMS 3E regulations as the national category – including two-seater production sports cars and utes.

“With more cars both new and current that haven’t been able to race with us before now able to come and join in, we are really looking forward to seeing how our grid develops across the year.”

The former will be awarded to the competitors who have amassed the greatest number of points across the six-round calendar, on an outright and class basis.

The latter will be likewise, except that it shall exclude the season-opening Bathurst 6 Hour, and therefore apply to rounds two to six only.

“This means that some cars who can race with us at rounds two through six are not able to compete in round one.

“Because of this, we wanted to make sure that those racers weren’t counted out of the running through no fault of their own.

“With 2017 being a transition year, it is our hope that from 2018 all cars will be competing for the APC Cup across all rounds.”

APC will also adopt the same class structure utilised by the Bathurst 6 Hour.

The Hi-Tec Oils Bathurst 6 Hour will be held at Mount Panorama from April 14-16.