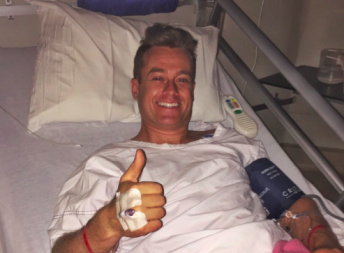 Denyer sustained a broken coccyx and finger in addition to heavy bruising, while his co-driver Moscatt suffered a broken knee and a suspected fractured vertebra during the Australian Tarmac Rally Championship event on Sunday.

CAMS has expressed safety concerns for the Lake Mountain Sprint Rally in Victoria and the Australian Tarmac Rally Championship which is not an event or series sanctioned by the governing body.

This morning CAMS released a statement urging Police to investigate the incident following reports authorities elected against conducting its own review having believed the meeting was a CAMS event.

“The Australian Tarmac Rally Championship is not an authorised series or championship CAMS,” read the statement.

“CAMS has previously expressed concerns about this and similar events with regard to the safety standards applicable to such high risk activities on public roads.

“CAMS remains concerned with high risk motor sport events that are not permitted by CAMS.

“Victoria Police have apparently indicated that they will not investigate this matter as it was under the mistaken impression that this was a CAMS sanctioned event.

“Given that this is not a CAMS permitted event, we would welcome a thorough investigation by the Police of the incident given that CAMS will not be given access to important accident data and information by the event organiser.

“CAMS places a priority on upholding a high level of safety standards, in particular at rally events, to ensure the safety of competitors, spectators and officials, and to protect the integrity of Australian motor sport.”

The injured drivers continue to recover from the crash with Denyer posting a message on Twitter expressing his gratitude for the messages of support.

Dale & I can’t thank u enough 4 all the wonderful messages of support. It’s really lifted our spirits. V sore but ok pic.twitter.com/rSTTN7n8h8

Meanwhile, Moscatt has taken his first steps following an operation on his knee and is expected to make a full recovery.

“It’s been a whirlwind couple of days in the aftermath of our little off road excursion yesterday,” read a post from Moscatt’s official Facebook page.

“As I have started on the road to recovery and I’d like to pay a heart felt tribute to the hard working efforts of Race Solutions, the other crews on hand and all of the medical staff who helped with my extraction from the car and transport to hospital as well as our Family at Lotus who have been absolutely fantastic throughout.

“You are all legends and I cannot thank you enough for your help and empathy in what were difficult circumstances.

“A massive thanks also to my beautiful wife for being with me here as well as family and friends for the hundreds of calls and messages of support, you have really helped keep my spirits up and it is sincerely appreciated.

“Update wise the operation on my knee went very well this morning and I have already taken my first steps in Physio (as has Grant). GD is a tough ‘little’ nut too and the prognosis for us both is for a full (and hopefully fast) recovery, so I’ve taken all your thoughts as motivation and am making good progress.

“See you in the forest again soon.”