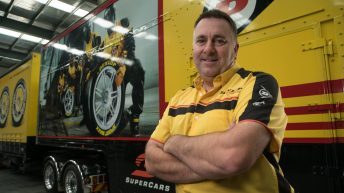 Dunlop’s Supercars operations manager Kevin Fitzsimons believes that outside influences were to blame for Fabian Coulthard’s tyre failure while leading the final race at the Rolex Australian Grand Prix.

Coulthard led by more than a second when the left-front tyre on his Shell V-Power Falcon suffered a blow out near Turn 7, costing DJR Team Penske a clean sweep of the weekend’s four races.

Fitzsimons said that the incident was extremely unusual, but after an investigation did not believe that the failure was due to a tyre defect.

“The tyre was too damaged by the time it got back to the pits for us to make a 100 percent assessment,” said Fitzsimons, an industry veteran of 27 years.

“All we know for sure is that it was a sudden and total loss of all air pressure, without any warning or prior vibration.

“I have not seen a tyre give out like that without being helped by outside influences and the team will know what they may or may not have been.

“Even a puncture from a sharp piece of shrapnel would not cause such a dramatic and instant loss of air.”

Fitzsimons said that teams are given clear guidelines on what the workable boundaries are with the tyres.

“We provide the teams with what we think are the parameters for these tyres in regards to pressures and camber and it is up to them how far they push the boundaries,” he said.

“We have been delighted with both the performance and durability of the tyre and the feedback from the teams has been extremely encouraging.

“Motor racing is about pushing the envelope and getting the most out of every asset whether that is engines, suspension, people or tyres.

“Sometimes the risk outweighs the reward, but at the end of the day it is the team’s call.

Coulthard said that he had no warning when the tyre let go while leading.

“I hit the brake pedal and at the same time I had an issue with the left front tyre. There was absolutely no warning,” said Coulthard.

Jamie Whincup, who briefly held the lead as a result of the #12 puncture, told Speedcafe.com that a broken brake bias cable was ultimately responsible for his own left-rear tyre failure just a few laps later.

Nissan Motorsport’s tyre troubles at Adelaide, namely left-rear failures for Michael Caruso and twice for Todd Kelly, are believed to have been set-up related.