Viñales wins after Zarco crashes out of lead 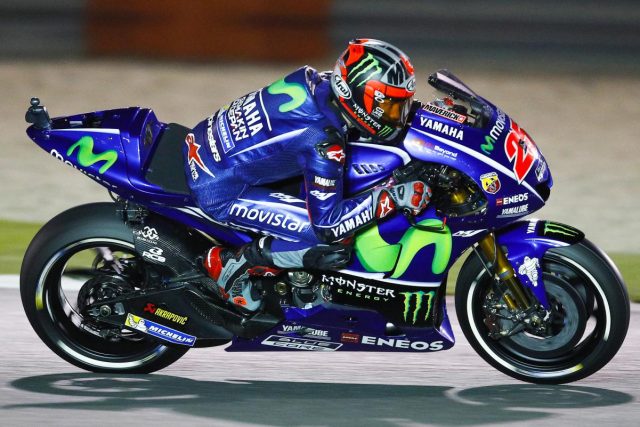 Maverick Viñales has taken a hard-fought victory on his Yamaha debut after rookie Johann Zarco crashed while leading the Qatar Grand Prix.

Viñales passed and eventually shook off Andrea Dovizioso in a late-race battle for the lead, while Valentino Rossi came through from tenth on the grid to finish on the bottom step of the podium, with Marc Marquez fourth.

The start was twice delayed, first due to a rain shower which occurred with bikes waiting on the starting grid and then when riders encountered wet verges on their out lap as the grid re-formed.

Starting positions had been set by combined practice results after all Saturday running was washed out completely, and the race was shortened from 22 to 20 laps as a result of the two delays.

Andrea Iannone got the holeshot and led the 23-bike field through the opening corners before an aggressive Zarco took over, with Marquez following him through to second position.

Meanwhile, Viñales was shuffled back to fifth and Lorenzo emerged 16th after running wide.

Marquez and Iannone briefly traded places on Lap 2 before Dovizioso used the straightline advantage of his factory Ducati to pick both off and take second over the next few laps.

Zarco led by 1.6s in a sensational debut for the Tech 3 Yamaha rider before he stepped wide of the line and crashed on Lap 7, at Turn 2.

Now leading, Doviziso gained some breathing space when Marquez and Iannone resumed their battle on Lap 9, and the two Movistar Yamahas closed in to the fight for second.

Iannone threw away third place when he crashed on Lap 11, with Viñales doing well to not collect the falling factory Suzuki.

Viñales and Rossi soon demoted Marquez to fourth and then caught Dovizioso.

The pole-sitter Viñales led for the first time on Lap 14, the first of seven lead changes between he and Dovizioso by the end of the race.

The Italian pushed hard on the final lap but didn’t have enough for Viñales, whose second win of his MotoGP career came much harder than might have been expected after dominating pre-season testing.

Rossi faded at the end but still finished comfortably clear of the Repsol Honda pair of Marquez and Dani Pedrosa.

Sixth-placed Aleix Espargaro gave Aprilia its best result since returning to the premier class in 2015, ahead of Scott Redding (Pramac Ducati).

In Moto2, Remy Gardner crashed out in a three-rider incident on the opening lap while Italian Franco Morbidelli won for the first time.

The MotoGP world championship continues in Argentina from April 7-9.

Next Story Miller buoyed by top 10 finish in Qatar