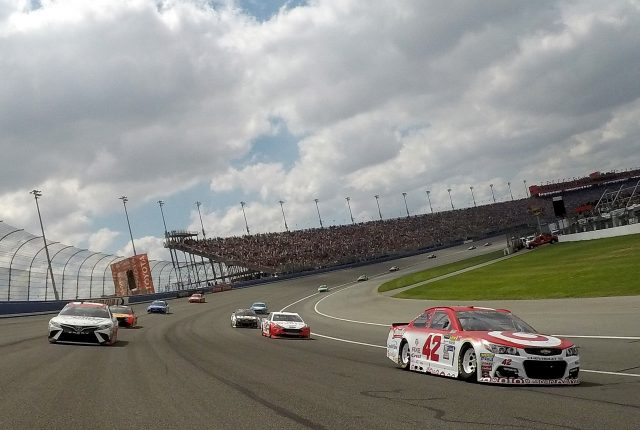 Kyle Larson out front in California

Kyle Larson has won the Auto Club 400 at Fontana in California and in the process swept both the XFinity and Monster Energy NASCAR Cup races of the weekend.

Larson converted his pole position, and took the bonus points for winning the first stage of the race as well. It was his second career victory in the Cup Series and increases his lead in the standings.

Larson has enjoyed a great start to the season with today’s win making it four top-2 finishes in five races.

On long runs he was strong and with despite a succession of caution periods towards the end of the race, he was able to drive through to the lead after others took the tyre gamble and stayed out.

The only other driver who seriously contended was Martin Truex Jr. who won the second bonus stage. However, he was one of the tyre gamblers at the end and he would go onto finish in fourth.

The major danger for Larson at the end was Brad Keselowski, but Larson had more than enough for the Penske driver.

With six cautions in the final third of the race, Larson had to keep his head.

“I was staying as calm as I could be, but also frustrated at the same time it seems that every time I get to the lead a caution would come out and I had to fit people off on re-starts.

“But our Target Chevy was amazing today and we were able to lead a lot of laps. Truex was better than us after the second stage, but then we got the jump on him and then lead from that point pretty much.

“We have been second so good all year long with so many second places, but today we showed that we do know how to win.”

In terms of the biggest disappointment Matt Kenseth was running in fourth when he went spinning and made hard contact with the inside wall after a late re-start. He would be classified in 36th.

NASCAR next week heads to the track known as the “Paperclip”, the flat half-mile at Martinsville.