Viñales on pole as qualifying cancelled 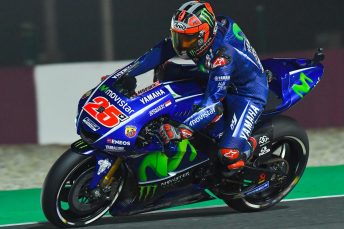 Maverick Viñales will start from pole

Maverick Viñales has been awarded pole position for the Qatar Grand Prix after qualifying was cancelled due to rain.

The Saturday program was cancelled in its entirety due to standing water at the Losail circuit, after heavy overnight rain and further falls during the day.

The starting grid has however been determined by the combined results of the first three practice sessions.

Officials had attempted to run the qualifying day program as normal, plus an extra 20-minute practice session for MotoGP riders to familiarise themselves with the conditions.

That session was cancelled and the rest of the night’s running delayed and eventually cancelled when the track did not dry in time.

In three dry free practice sessions, Viñales had set the pace in FP1 and FP3, while Scott Redding topped FP2 on a green track after rain earlier that Friday.

Redding will start sixth in the grid on his Pramac Ducati.

Australian Jack Miller will grid up in 16th on his Marc VDS Honda.

The status of the race, set down for Sunday night local time (0500 AEDT), remains uncertain, with the possibility that organisers will move the 22-lap encounter to an afternoon timeslot.

The Qatar Grand Prix has been run as a night race since 2008 but never in the wet due to concerns over visibility, and the 2009 race was even postponed to the Monday night because of rain.

However, testing conducted by Loris Capirossi and Franco Uncini in February left organisers confident that a wet night race could take place, and Michelin has brought wet tyres to the desert track for the first time.

Next Story Viñales wins after Zarco crashes out of lead