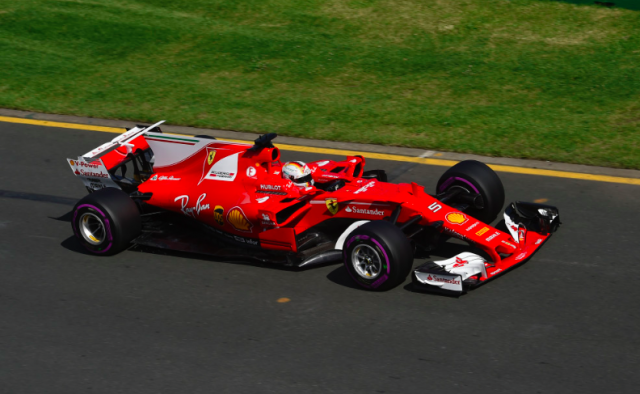 The Ferrari driver made the most of a longer first stint to jump early leader Lewis Hamilton which paved the way for an impressive victory for the Maranello team.

Vettel’s triumph was Ferrari’s first win since the Singapore Grand Prix in 2015 as the four-time world champion led the Mercedes duo of Hamilton and Valtteri Bottas to the chequered flag.

“(The championship fight) is a long, long way ahead,” said Vettel.

“For now we are just over the moon, just happy. It has been a hard winter and an incredible race today.”

Hamilton had been in the box seat after a strong start in his pole-sitting Mercedes but the complexion of the race changed after his first stop on lap 17.

The Brit rejoined behind Red Bull’s Max Verstappen who proved a challenge to pass despite his best efforts.

Hamilton lost valuable track time behind the Dutchman which ultimately cost him the lead.

The time spent behind Verstappen saw Hamilton extract the best from his soft tyres allowing leader Vettel to scamper away at the front.

Ferrari’s Kimi Raikkonen endured a quiet race to finish fourth ahead of Verstappen, who was the only Red Bull to make the finish.

His team-mate Daniel Ricciardo suffered a horrible home race which began with a an electrical drama on his lap to the start.

He joined the race two laps down before eventually retiring with an engine drama on lap 28.

Felipe Massa managed to bring his Williams home in sixth in front of Force India’s Sergio Perez and the Toro Rossos of Carlos Sainz and Daniil Kvyat.

Esteban Ocon rounded out the top 10 on his debut for Force India.

The Frenchman finished ahead of Nico Hulkenberg (Renault), Antonio Giovinazzi – who made his maiden F1 start for Sauber – while Stoffel Vandoorne brought his McLaren home in 13th position.

Just 13 drivers managed to reach the chequered flag in what proved to be a race of attrition for the sport’s fastest ever cars.