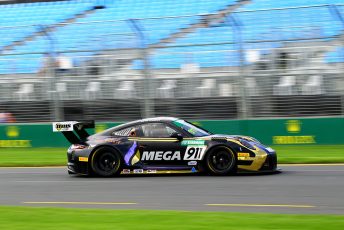 Talbot came from fourth on the grid to win the race, while Max Twigg crossed the line second but will come under scrutiny for an opening-lap clash with Fraser Ross.

Race 2 winner Roger Lago launched clear of the field at the rolling start but there was drama just behind as Twigg turned Ross’s McLaren around.

While the 25 cars following managed to avoid the broadside Tekno Autosports entry, carnage occurred just up the road when Peter Major put two wheels in the grass while braking for Turn 3.

The Major Lamborghini slid across the track and took out Hector Lester’s Ferrari, who glanced the wall before coming to rest in the gravel trap and triggering the Safety Car.

Ironically, the same two cars failed to finish the day prior after contact between Major and Benny Simonsen.

The race restarted on Lap 4, and Liam Talbot wasted no time as he outbraked Twigg at Turn 1.

The 2016 Blancpain Endurance Cup Am champion then took advantage of a Lago error under brakes as he passed the race leader into Turn 11.

Lago dropped to third in the process as he attempted to hang tough on the outside but ultimately had to file in behind Twigg.

Ryan Millier brought out the Safety Car for a second time when he sailed off at Turn 1 at the end of the restart lap, down the inside of Lago, before gliding across the gravel trap and finding the wall.

The field was allowed one final lap of green flag racing before the chequered flag, and Talbot gapped the field to collect a race win to add to his class win in the Walkinshaw Porsche at the Bathurst 12 Hour.

Geoff Emery dived past Lago at Ascari to take third, but may well be promoted to second if Twigg is penalised for the opening lap incident.

For now, Lago is classified fourth and the top 10 is rounded out by Yasser Shahin, James Koundouris, Tony Walls, Tony Bates, Marc Cini, and Tim Miles.

Nick Kelly had crossed the line in eighth but was issued a five-second penalty, dropping him to 14th.

Round 3 will support the Virgin Australia Supercars Championship at the Perth SuperSprint from May 5-7.