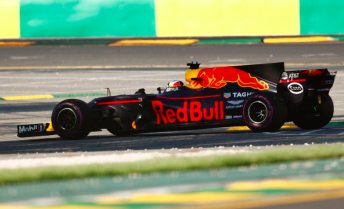 Daniel Ricciardo’s Australian Grand Prix turned from bad to worse after a suspected engine failure brought his race to a premature end.

The Australian joined the race two laps down after an electrical issue caused him to grind to halt on his lap to the grid prior to the race start.

After joining the race late Ricciardo circulated until lap 28 when he came to a halt at the Turn 3,4,5 complex in 18th position.

“Unfortunately it looks like an engine failure so that is an end of his day.

“I don’t know what has failed until he gets the car back. We will have to wait to see what the culprit was.

“We had gone to a race safe mode and that happened.”

The drama caps a disastrous home race for Ricciardo which turned sour on Saturday when he crashed in qualifying without setting a time in Q3.

The four-time grand prix winner qualified 10th but damage incurred to the rear of the RB13 forced Red Bull to make a gearbox change resulting in a five-place grid drop.