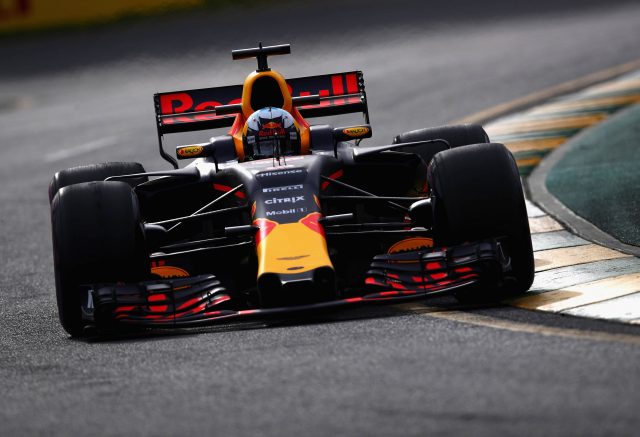 Daniel Ricciardo is pinning his hopes on a Safety Car intervention to offer him an opportunity of a podium finish in today’s Australian Grand Prix.

The Red Bull driver’s bid for a strong result on home soil was dashed by a mistake in Saturday qualifying that saw him find the barriers at Turn 14 while on a flying lap in Q3.

As a result the four-time grand prix winner will start from 10th on the grid in a Red Bull, which is a second shy of the front running Mercedes.

Given his low starting position, which could drop to 15th if Red Bull is forced to make a gearbox change, he believes a Safety Car will be required for him to charge through the field.

Ricciardo is desperate to claim a podium in front of his home crowd after being disqualified from a second place finish at Albert Park in 2014.

“I am hoping for a lot. There is a chance that I might be worse than 10th on he grid as well,” said Ricciardo.

“If I do have to change a gearbox that puts me back another five places so it is going to be either 1oth or 15th and both aren’t ideal.

“I didn’t use two sets of ultra soft in Q2 which means I have new ultra soft for the race so if I did do a two-stop that would work in my favour perhaps.

“A Safety Car would make that a bit more nice, so maybe a Safety Car with around 15 laps to go would be the dream scenario.”

“I think it’ll be very difficult (for Ricciardo to finish on the podium), but who knows?,” Webber told Speedcafe.com.

“You’ve got to have high attrition at the front, you need a big incident in the first lap, so that’s a possibility.

“First of all, Daniel never makes those mistakes.

“They’re very, very rare – very rare – for Daniel, and speaking from experience I think this week is a long week.

“You’ve got to be professional but it’s a very, very long week in terms of all the commitments outside the car, which can be frustrating, so he’ll learn from that and understand why it happened.

“He’s obviously mid-pack and he’s got to come back and get the points, obviously.

“He’s just got to keep his chin up and go for it.”

Facing deficit in terms of downforce and power compared to Mercedes and Ferrari, Ricciardo is hoping the race can help provide crucial data to help the team progress in the future.

“The race will hopefully give us a few answers no matter where we end up,” he added.

“We have just got to try and get those laps and figure it out, the long runs on Friday we struggled quite a bit as well, so we will see.”

The Australian Grand Prix is scheduled to start at 1600 local time.