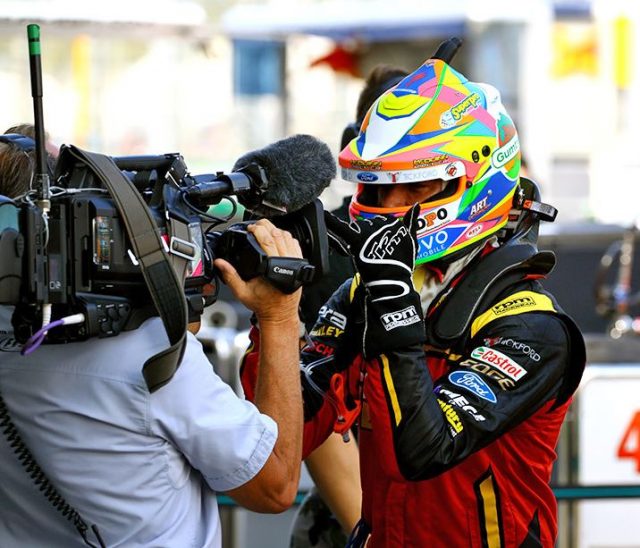 Chaz Mostert is relieved to return to winning ways by claiming a first race victory since 2015 in the final heat of the Coates Hire Supercars Challenge at Albert Park.

The Prodrive racer capitalised on misfortune for leader Fabian Coulthard, who suffered a puncture while leading the final 13 lap non championship race of the weekend.

Mostert enjoyed a strong run throughout occupying third before inheriting the lead on lap 8, which he then turned into a first victory since Sydney Motorsport Park in August 2015.

Although the race was a non-points scoring affair, Mostert was pleased to return to the top step of the podium having endured a winless 2016 campaign.

“I only got the podium through some misfortune from some of the other guys, but I’m pretty ecstatic to get win considering I haven’t had one since 2015,” Mostert told Speedcafe.com.

“I don’t know if you count the grand prix for wins but there are a lot of guys that do so we will definitely take it.

“Last year I went without a win so it is good to get the monkey off the back and we have just got to keep trying to produce this form and get more wins.”

While confident his Prodrive squad has made progress with the Supercheap Auto FG X Falcon, Mostert says his team still has work ahead to close the deficit to DJR Team Penske and Triple Eight.

“I think we are still building with the car. We have learned a lot this weekend,” he added.

“We were running third when the front two guys fell off so there is still a lot of work to do. We will just keep chipping away at it.”

Mostert will jump behind the wheel at the Tyrepower Tasmania Super Sprint from April 7-9.