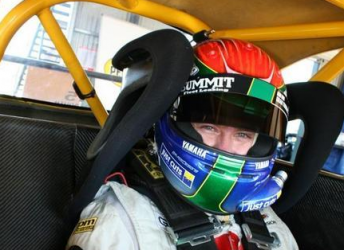 Grant Denyer has been cleared of serious injury after being airlifted to hospital following a crash in the Australian Tarmac Rally Championship in Marysville, approximately 100km north-east of Melbourne.

While Denyer extricated himself from his crashed Lotus, experienced co-driver Dale Moscatt had to be cut from the wreckage and is believed to have broken a leg.

Speedcafe.com spoke to Denyer’s father Craig, before boarding a flight from the Gold Coast to Melbourne to see his son.

“I am on my way to Melbourne now,” Craig Denyer told Speedcafe.com.

“All we know is he is bruised and in hospital for observation.

“He was leading the (Lake) Mountain Sprint rally when they left the road and went down a mountainside.

“Grant got out and clambered up the side of the mountain for help.

“Dale was trapped in the car and they had to cut the roof off to get him out with a suspected broken leg.”

Denyer’s manager Titus Day told news.com.au that the 39-year-old had suffered a suspected broken finger and lower back bruising.

The Australian Tarmac Rally Championship released a statement on Facebook this afternoon confirming that Denyer and Moscatt had been conveyed to Melbourne with minor injuries.

Denyer has previously broken his back in a monster truck crash in 2008.