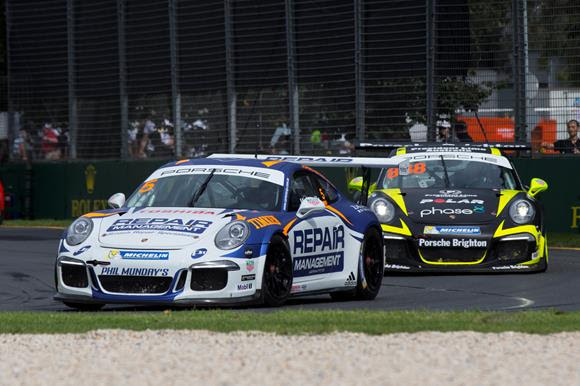 Cameron McConville has taken his first race win in the Carrera Cup with victory in the third of four races at Albert Park.

The vastly experienced McConville, who competed in a wide range of categories including Supercars, got a great jump from third on the grid to trail Race 1 and 2 winner Nick McBride into the opening turn.

Then on the backside of circuit McConville made his move and checked-out from that point for the remainder of the 10-lap journey.

Attention then switched to behind where the Sonic Motor Racing Services team-mates of McBride and Andre Heimgartner battled for second.

However, on a charge was Alex Davison who passed Heimgartner on lap #6 and then McBride the following lap. The gap to McConville proved too large with Davison settling for second ahead of McBride.

Heimgartner slipping to seventh place at the finish after he was judged to have jumped the start and incurred a 5-second penalty.

Stephen Grove kept his perfect record in the Tag Heuer Carrera Challenge for 2017, winning from Marc Cini and Dean Cook.

The final race of the Carrera Cup will be on Sunday as the curtain-raiser to the Formula 1 Australian Grand Prix. Race start at 1350.

AUDIO: McConville and Grove speak after the race