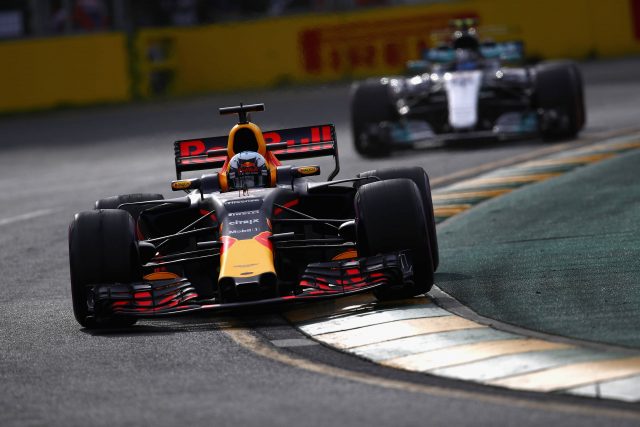 Daniel Ricciardo remains confident his Red Bull has the pace to edge closer to Mercedes despite a dominant performance from the Silvers Arrows in practice at Albert Park.

The Australian was a second adrift of Lewis Hamilton following the pair’s ultra-soft tyre runs in second practice after an encouraging morning session that saw Ricciardo end up third in the time sheets.

Red Bull’s updated RB13 was able to produce a more impressive showing than in Barcelona pre-season testing, but it remained behind Mercedes and Ferrari in the pecking order.

Ricciardo remains unconcerned by the current deficit to Mercedes, claiming the direction the squad took in second practice didn’t provide the expected rewards.

While he admits pole position is realistically out of reach, he says Red Bull has the ability to peg Mercedes back a bit.

“Mercedes are quick but I didn’t think they are insanely quick but they are quicker than us,” said Ricciardo.

“I think we can reel some of that advantage back.

“Pole would be a stretch but we can be in that next little group.

“We tried a few things this afternoon and I think it is fair to say didn’t work as well as we would’ve liked.

“We will probably go back a bit and understand what we can do better for tomorrow. I think Mercedes is quick but it is more Lewis than Valtteri at the moment.

“Valtteri looks to be in our group with Ferrari and I think we can be there.

“We will be alright. If we do something similar to what we did this morning then we can definitely be in it.”

The Dutchman then endured a brief off-track moment in second practice which resulted in a damaged floor on his RB13, before ending up sixth fastest in Practice 2.