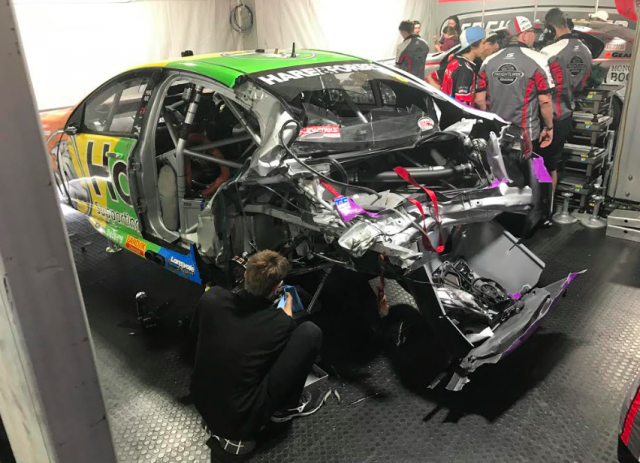 Nick Percat has emerged unscathed from the biggest shunt of his career after suffering a heavy impact in the opening Supercars race of the Australian Grand Prix weekend.

The Brad Jones Racing driver encountered a brake failure heading into Turn 1 at Albert Park in the closing stages of the 13 lap non-championship race.

Percat’s car snapped to the right before backing into the side of the innocent Lee Holdsworth (#18 Preston Hire Commodore) at an estimated 250km/h.

The heavily damaged #8 BJR Commodore eventually came to rest against the barriers while Holdsworth was sent spinning. 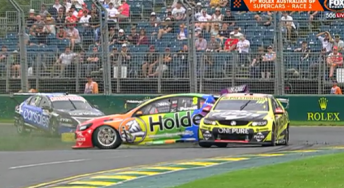 Percat confirmed to Speedcafe.com he has escaped without injury although he was struggling to breath in the aftermath due to fuel fumes that had entered into the cockpit

“I have never had a big one ever, I never had a crash like that in go karting, Formula Ford or whatever,” Percat told Speedcafe.com.

“It obviously shakes you up but if we had another car I would have been sitting in it for Race 2.

“It is just kind of survival and you think about some way to miraculously disappear from the situation into a better one.

“I didn’t know (about the brakes) until I put my foot on the brake at the 150 metre board and the car went right. I didn’t try and fight it to go straight.

“I thought if I could avoid the others would be ideal but unfortunately I hit Lee.

“There was fuel fumes in the car so and I was breathing them in.

“It took all the oxygen away from me and It was suffocating me a little bit. I was just coughing a lot and I felt like I was going to basic from the fumes.”

BJR will assess the damage to the #8 Commodore although it is unlikely the car, which ran a special ‘Supporting Equality’ livery this weekend, will return to competitive action at Albert Park.

“I imagine the car is done,” he added.

“The team had a big one in New Zealand and they managed to get that fixed. If there is anyone that is going to fix it, it is them.

“It is shame. Good to have the support of Holden with that (Supporting Equality) program.

“The spread that livery has had around the world has been incredible and it is good to see that everyone has got on board and got behind it. It is pretty cool to have it on my car.

“I hope this is all the bad luck out of the way.”

The Supercars field will contest another 13 lap race at 1750 local time.