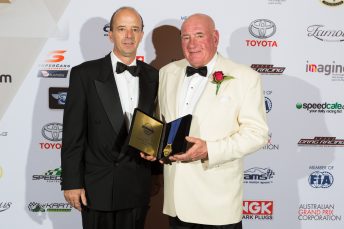 The head of a famous Australian motorsport dynasty has been honoured at the Australian Motor Sport Hall of Fame, presented by Speedcafe.com, in front of more than 400 guests in Melbourne tonight.

The late Lex Davison, four-time Australian Grand Prix winner, was the fourth person inducted into the Hall of Fame at the 2017 edition of the awards.

Born in Melbourne in 1923, Davison was called up to military service at 18 years of age but was discharged within a year due to his father’s ill health.

His first step into motorsport came in October 1946 with the New South Wales Grand Prix at Bathurst.

He would win the Australian Grand Prix in 1954 at Southport in a Jaguar, in 1957 at Caversham in a Ferrari, in 1958 at Mount Panorama in a Ferrari, and finally in 1961 at Mallala in a Cooper-Climax.

In 1960, he was pipped on the last corner of the last lap of the AGP at Lowood in Queensland by Alec Mildren.

The tall Victorian’s life was tragically cut short at just 42 years of age when he suffered fatal head injuries in a crash at Sandown International Raceway.

Davison had suffered a heart attack and left the circuit at 160km/h, dying before help arrived at the scene.

Ironically, Davison’s son Jon would go on to be the track manager at Sandown for almost 20  years and accepted his father’s award on behalf of the Davison family tonight.

“It is just a great honor for him (Lex) and a wonderful night for the Davison family,” Jon told Speedcafe.com.

“I think it is very symbolic of an extraordinary career which I don’t think will ever be emulated, when you look at everything in and out of the car.

“I think his general presence and the respect people had for him is something that will live with all of us, despite all the kids ranging in age from 17 to six at the time.”

Lex’s son Richard, father to Alex and Will who will be driving a Porsche Carrera Cup car and Supercar at Albert Park respectively this weekend, won the 1980 Australian Formula 2 Championship.

Lex’s legacy also lives on in the form of the perpetual Lex Davison Trophy, which is presented to the winner of the modern-day Formula 1 Australian Grand Prix, and a road at the Albert Park venue was named after him just this week. 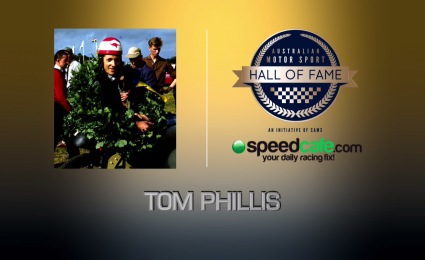