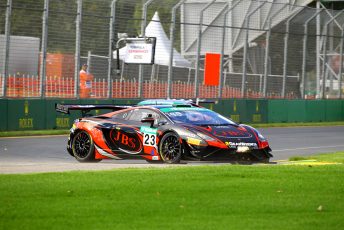 Roger Lago has taken a thorough victory in Race 2 of Round 2 of the Australian GT Championship at Albert Park.

The Lamborghini RE-X driver beat Fraser Ross home by 4.3s in what was an 11-lap journey, while Peter Major took third on the final lap.

In the first race for the lower-ranked drivers, Lago got a run on the outside of pole-sitter Max Twigg and beat the #8 Mercedes out of the first corner.

He had amassed a 3s lead by the end of the opening lap and never looked back in the 25-minute race.

Ross threatened Twigg for several laps before squeezing past on Lap 7, making slight contact, but was not troubled again in the Tekno Autosports McLaren.

Major then set about working over the AMG GT-S, and eventually found a way by at Ascari on the final lap.

However, a five-second penalty for a start infringement saw him relegated to fifth, elevating Twigg back to third and Liam Talbot to fourth.

There were a number of incidents throughout the race, the first being when Tony Bates locked up while running third on the opening lap and into the Turn 3 gravel.

The two-time race winner at Adelaide would also spin his Mercedes at the fast Turn 11/Turn 12 complex late in the race.

Emery had also wobbled off the road on Lap 1 having inherited third from Bates, while his Jamec Pem team-mate Tim Miles looped his Audi at Ascari on Lap 7, forcing Adrian Deitz to dive to the grass.

Tony Quinn also spun at Turn 11 on Lap 8, having tried to avoid contact with Bates on his inside.

The next race for the Australian GT Championship at the Albert Park will be held tomorrow (Saturday 25 March) at 12:05 local time.