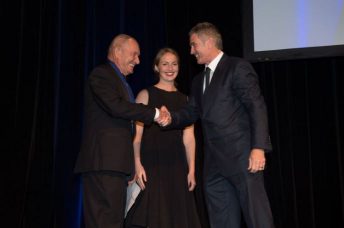 John Pizarro has been inducted into the karting section of the Australian Motorsport Hall of Fame, presented by Speedcafe.com at the Melbourne Convention Centre.

He won his first national title at Sunnybank, Queensland in 1968, became the first Australian to hold an International Super Licence, and competed in five world championships.

Pizarro was also a part of the DAP works team during the 1970s alongside the late Ayrton Senna and Terry Fullerton.

“I’m absolutely humbled to accept this award, it is a true honour to be recognised for my achievements in karting,” said Pizarro.

“To be standing here in a room full of so many of icons of Australian motor sport is a fantastic feeling and great for the sport of karting.

“I’m so pleased that karting is being recognised as a sport in its own right and not just about being a stepping stone to other forms of motorsport.

“The sport has given me so much joy over the years and to be here with my family and friends tonight has been a real highlight for me.”