Tauranac, 82, and influential administrator John Large were the two inductees on tonight’s list to receive their awards in the ‘Special’ section as non-competitors.

Tauranac and Sir Jack Brabham formed one of the greatest alliances in motorsport history through the 1950s and 1960s, resulting in two World Drivers’ Championships and two constructors titles.

Ironically, another collaborator of the pair during that time, Phil Irving, was inducted into the Hall of Fame last year along with Brabham.

Tauranac and his brother Austin created Ralt cars in Australia in the 1950s. Ron drove as well as designing and building the cars, and won the 1954 NSW Hillclimb Championship.

During this time, Tauranac had done work for Brabham in Australia before he moved to England.

Their Formula 1 interests started when the Cooper Car Company, with which Brabham had won his first world championship in 1959, didn’t see the need to improve the car for the following year.

Brabham sent Tauranac some thoughts on the rear suspension, to make the car lower and switch from transverse leaf springs to coils.

Together the work was done and Brabham won his second championship with a low-line Cooper, with Tauranac’s valuable input.

With things still stalled at Cooper, Brabham persuaded Tauranac to join him full time in England and they formed the Brabham racing operation in 1962.

Tauranac took control of the team when Brabham retired in 1970 and later sold the operation to Bernie Ecclestone in 1972.

Tauranc then resurrected the Ralt name and designed cars for F3, F2 and Formula Atlantic.

Australian Larry Perkins, who was also inducted into the Hall of Fame tonight, drove a Ralt to victory in the 1975 European F3 championship.

Tauranac and Ralt would go on to win many more championships before he sold the business to March Engineering in 1988.

Despite moving back to Australia and advancing in age, Tauranac keeps an active eye on the engineering front and has been a design judge at the annual Formula SAE Australasia competition in Melbourne.

“It is an honour to be given this award,” said Tauranac.

“There are some familiar faces here.

“It was great to see Jack (Brabham) also inducted last year; he was the biggest influence on my life.

“He got me over to England and I had enough money leftover to put my wife and three year old daughter on a boat as well.

“I thought I might have done some racing over there, but in the end we engineered some cars.” 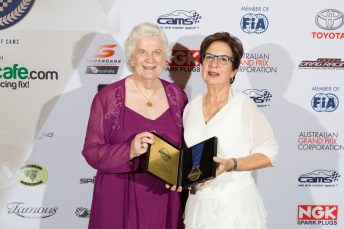 Large was born in Burnie and raised in Launceston.

A successful pharmacist then rally navigator, he partnered Ross Dunkerton when they became Australian rally champions in 1975.

John then jumped to motor sport administration, becoming President of CAMS just eight years later in 1983. He remains the longest running CAMS president, holding the office for 12 years until 1994.

During Large’s time as president he became a member of the FIA Motor Sport Council, which led to him playing a major role in Australia securing its first F1 World Championship Grand Prix in 1985. Just four years later, Australia gained a World Rally Championship round.

Large died in 2006 and his medal was accepted by his widow Maria and sister Carol.

Irving and Donald ‘DKT’ Thomson, who helped establish CAMS in 1953, were both inducted under the ‘Special section’ category last year.