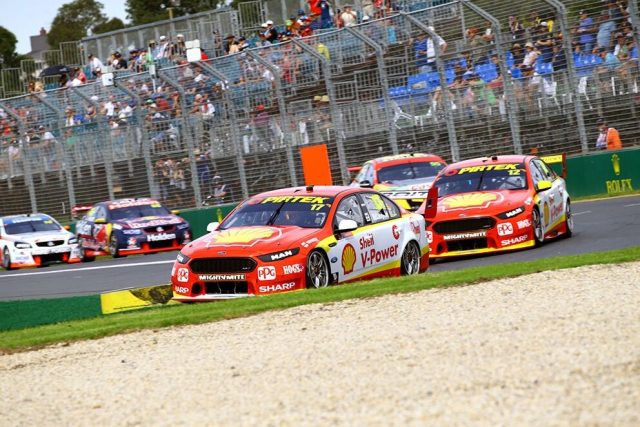 Dick Johnson has reflected on his pride after Scott McLaughlin and Fabian Coulthard delivered DJR Team Penske a one-two in front of the Formula 1 paddock at Albert Park.

Scott McLaughlin’s win is the first for the Queensland-based squad since Penske’s involvement, and the first since Chaz Mostert broke through at Queensland Raceway in 2013.

“It’s a fairly big meeting and internationally it’s a big deal so from our point of view and certainly from Roger Penske’s and (Team Penske president) Tim Cindric and all the Penske organisation. I’m sure that they’ll be happy as well,” Johnson told Speedcafe.com.

“For me the big focus is that fact that we’ve got Shell back onboard as a major sponsor and it certainly brings back a lot of good memories from in the eighties and nineties.

“We had some fantastic results not too dissimilar to that.”

Johnson was cautious of making any bold predictions about the team’s prospects going forward, but expressed excitement at how his personnel have interacted with each other after more significant off-season upheaval.

McLaughlin has replaced Scott Pye in car #17, while Ludo Lacroix switched from Triple Eight Race Engineering to engineer the Kiwi.

“Well one swallow doesn’t make a summer but at the end of the day I think the cars are showing a lot of speed and the team’s working together very, very well indeed, explained Johnson.

“The drivers are just working together extremely well, which is a very pleasing outcome, and to start to get some results is where I’m looking forward to, I can assure you.

“When you’re on top there’s only one way you can go and sooner or later you get deposed, so I hope from this point on it’s about our turn.”

Coulthard and McLaughlin will again share the front row for this afternoon’s second AGP heat at 1750 local time.