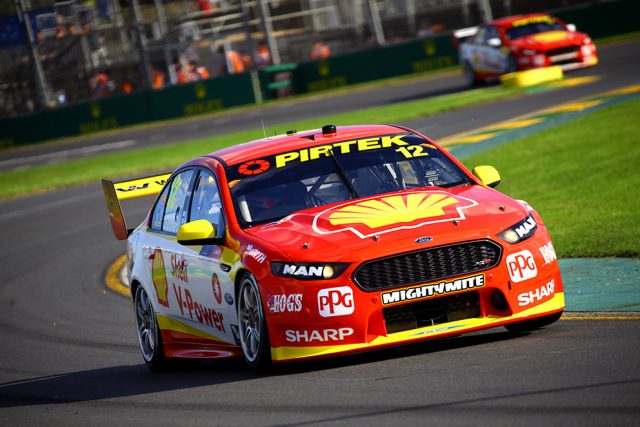 Fabian Coulthard and Scott McLaughlin gave DJR Team Penske another one-two as Shane van Gisbergen was taken out of the fight in Race 2 at Albert Park.

Coulthard led from pole to score his first win for the Ford squad with McLaughlin following all the way, while a strong start for Michael Caruso saw the Nissan Motorsport driver finish third.

Caruso had dived from the inside of the third row as Coulthard led the field away from the rolling start.

Jamie Whincup, on the other hand, was shuffled back from third on the grid to seventh during the opening lap.

While the leaders began to spread out, Chaz Mostert was searching for a way past fifth-placed van Gisbergen, when he tagged the Red Bull HRT Commodore into a spin at Turn 15 on Lap 3.

The Supercheap Auto Falcon took to the grass as a result, followed by Whincup taking evasive action, but James Moffat was unsighted behind the Craig Lowndes Commodore and hit car #97 head-on.

The incident brought out the Safety Car.

“He was ducking out being quite aggressive, he was quite speedy,” said van Gisbergen of Mostert.

“I saw him there, under brakes, was quite far back so I thought he was too far back and turned in. I gave him a little bit of space but you know, (he was) nowhere near close enough.”

Mostert, who had made contact between the B-pillar and rear wheel of the Commodore, was issued a drive-through penalty.

Prodrive Racing Australia team principal Tim Edwards, however, said during the race that, “(It’s) disappointing really because from what we’ve seen it looks very similar to what happened to Frosty in Adelaide.”

When racing resumed on Lap 7, the Shell V-Power Falcons pulled away from the field again as Coulthard won by 1.7s in a race shortened to 11 laps.

A typically aggressive Garth Tander could not find a way past Caruso in the second portion of the race, but achieved his best result since his return to Garry Rogers Motorsport by finishing fourth.

Will Davison benefited from the drama to climb from 12th to fifth over the course of the race, while sixth-placed Mark Winterbottom faces a post-race investigation for a possible infringement on the restart.

Whincup, Cameron Waters, Lowndes and Tim Slade rounded out the top 10, while Mostert was last of the finishers in 19th.

Alex Rullo retired with a braking issue, Simona de Silvestro with a jammed throttle, and Dale Wood with steering damage after opening-lap contact with de Silvestro and Tim Blanchard.

The third of four races at the Australian Grand Prix will be run tomorrow from 1520 AEDT.