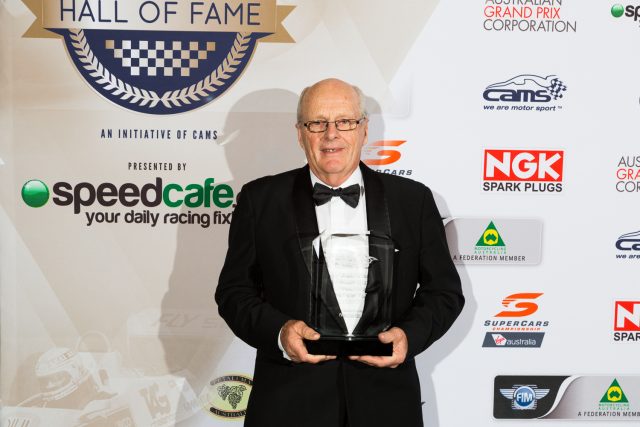 With more than 50 years of his life dedicated to the sport, Rogers was a special guest at tonight’s Australian Motor Sport Hall of Fame dinner in Melbourne, but had no idea of his pending surprise presentation.

Speedcafe.com founder, Brett “Crusher” Murray, said that there was a solid list of candidates for the inaugural Spirit of Speed award and that Rogers was more than a worthy recipient.

“We had a solid list to choose from as you would expect with more than 80,000 motorsport volunteers across the country,” said Murray.

“As now one of the leading five dedicated independent motorsport news outlets in the world, I am personally proud of the heights achieved by Speedcafe.com as an Australian born and operated product in less than seven years.

“As part of our on-going commitment to the motorsport community we are always looking at ways of increasing the exposure of our sport and to ensuring we are always in a position to give something back.

“We all known that loyalty and commitment is a common theme through our sport at all levels, but that stands out above all else when it comes to our volunteers.

“While most clubs and associations acknowledge their own, we thought it fitting that the act of volunteering be highlighted with a truly national award that rewards an official or volunteer for a lifelong contribution and Paul Rogers Sr is certainly a worthy recipient.”

For more than 50 years, Rogers has spent the majority of his weekends as a drag racing volunteer, official, crew member, steward and competitor – he also cooked a few steak sandwiches and hot dogs in the canteen in his day!

Rogers was a foundation member of the Victorian Drag Racing Club in 1970 and is a life member of that organisation.

He was a drag racing delegate to the Australian Hot Rod Association and became part of the breakaway movement which became ANDRA in 1973.

In fact, he was at the very first ANDRA meeting and is credited with coming up with the name of the new national body, which remains in place to this day.

Rogers was nominated as one of the initial five members of the ANDRA Hall of Fame in 2013 and remains one of the sport’s leading technical inspectors and an ANDRA steward when required.

Rogers’ son, Paul Jr, was also at the dinner and had the honour of presenting a Hall of Fame medal to Australian drag racing legend Jim Read.

“This has made my life,” said Rogers Sr.

“I was a bit of a rough head and getting into the sport sorted me out. It has been my life and this has really capped it off.

“This is special for every volunteer in the sport. Thanks to speedcafe.com and everyone involved.”

As the winner of this award, Rogers receives a beautifully boxed trophy, a set of Dunlop tyres and a $2,000 travel voucher for business or personal use.