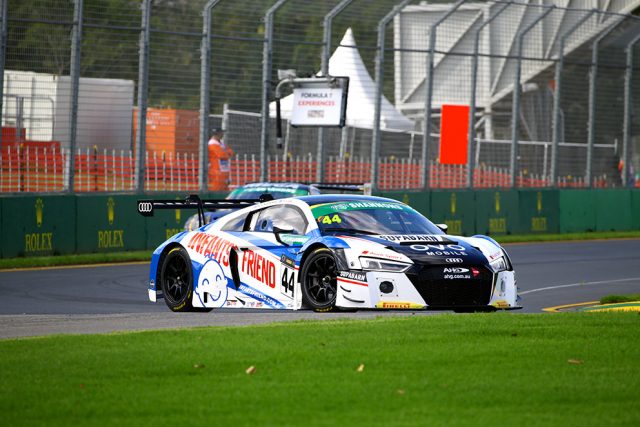 Ash Walsh fended off factory Audi driver Kelvin van der Linde to take out the opening race in Round 2 of the Australian GT Championship at Albert Park.

While the two Audis finished one-two, another came to grief after the chequered flag when Ash Samadi’s R8 turned hard right and headlong into the wall at the end of the main straight.

Walsh got a better launch than pole-sitter van der Linde and the Infant’s Friend entry exited the first corner in the lead.

The top two ran within a second before Walsh pulled away on Lap 9 and again on the Lap 11, the final lap, for his first win in the championship.

Van der Linde finished 2.1s behind for Jamec Pem, while Russell faded to a distant third after initially going with the Audis.

Daniel Gaunt and Dean Fiore made for four R8s in the top five, ahead of Glen Wood in a Lamborghini.

The top six ran unchanged throughout a somewhat processional 25-minute journey, while Lewis Williamson in the Tekno McLaren finally found a way past Steven Richards on the penultimate lap to claim seventh.

Cameron McConville then threatened the #100 BMW but had to settle for ninth in the Zagame Lamborghini, while Benny Simonsen completed the top 10 in a Ferrari 458.

The race ended in drama when Samadi hit the concrete wall head-on after an apparent failure in car #3.

Samadi had made contact with Ivan Capelli on the opening lap, the former’s left-rear corner coming across the latter’s right-front and pulling bodywork off the Trofeo Motorsport Lamborghini.

Samadi had crossed the line 17th, and would extricate himself from his crashed car, while the former Ferrari Formula 1 driver persevered on his way to 15th.

Race 2 for the lower-ranked drivers in the respective cars will be held tomorrow from 10:45 AEDT.