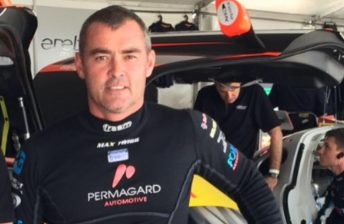 Twigg took the top spot from Talbot in the opening laps before the pair went on to swap the position back and forth – Twigg would eventually win out in this battle to lead the sheets by the end of his fourth rotation of the Australian Grand Prix circuit, but not for long.

Lago and Emery moved quickly to see him fall to P3 for a number of laps, with Lago holding the top spot until with just four and a half minutes to go. At this point, Twigg was able to regain P1 and from there was never headed – despite taking his Mercedes for a spin on the very next lap at the exit of turn five. Luckily for him, he was able to avoid any contact with the walls.

Not so lucky when it came to avoiding disaster was Tony Bates, who while fourth fastest saw the session declared with one minute and 24 seconds still on the clock when he became beached at turn three.

Also coming to strife across the 20 minute stanza were Michael O’Donnell who ran through the gravel at turn one early on but was able to re-join, and Talbot – who amongst battles for the top position had a few nervous laps that saw him twitch at turn 11 and shortcutting turn 12, before locking a brake and running off at turn one soon after – driving through the gravel trap to resume.