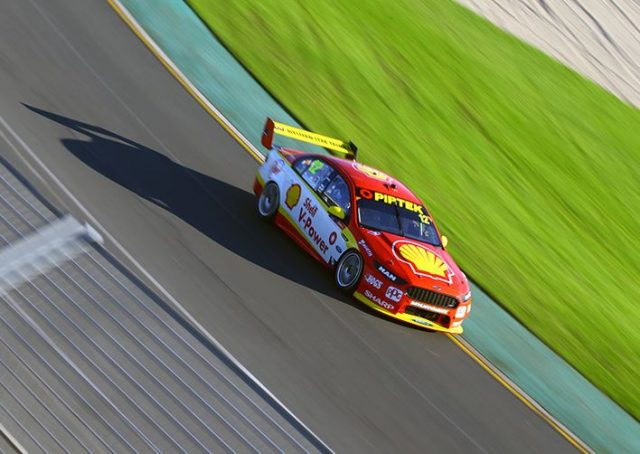 Fabian Coulthard has described his qualifying performance as “solid”, but denies that the team made any major set-up changes to the DJR Team Penske Falcon which slashed the qualifying record at Albert Park.

Coulthard took pole position for each of the first three races at the non-championship AGP meeting, before missing out on a perfect four by just 0.024s to Jamie Whincup.

In Qualifying for Race 1, the Kiwi had broken Whincup’s five-year-old qualifying record by 0.68s and finished 0.25s faster than team-mate Scott McLaughlin.

Coulthard was also the only driver to lap in the 1:54s bracket in all four sessions, and earlier topped the single practice session by 0.9s.

While the non-championship status of the Supercars races allows teams more freedom to experiment with set-ups, the 34-year-old said that only incremental improvements had been made to car #12.

“Not really,” he confirmed, when asked of any major set-up changes.

“There’s a few tweaks here and there – obviously you try and make it better for every session, so we tried and it would have been nice to get all four (poles) but we’ll take three.”

However, it is understood that new parts had been fitted to the Shell V-Power Falcon.

Coulthard was also satisfied with his efforts in the rapid-fire qualifying format.

A single 10-minute session set the grid for each of the four races, with most drivers opting for only a single flying lap on the Dunlop super soft tyres.

“We know with this format that it’s obviously a little different with a qualifying session for each race now as opposed to ‘where you finish is where you start’, so the idea was for it to mix up the field.

“I’m happy that we were able to get some good results with the qualifying sessions that we had – three poles and a second’s pretty good going so I’m pretty happy.”

“It was like four top 10 shootouts, so it was good practice for when we go to another event where we do a shootout.

“It was pretty stressful. Obviously you’ve got to nail every corner of every lap and thankfully we were able to do that today.”

Coulthard and McLaughlin will share the front row for the first two of the weekend’s four 13-lap sprints, which start tomorrow at 13:50 and 17:50 (AEDT).