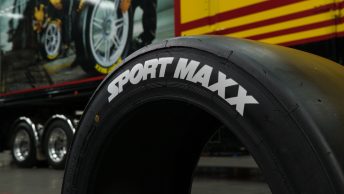 The new generation Formula 1 cars are not the only cars set to break records at Albert Park in Melbourne this weekend if predicted performance gains in the new Dunlop Super Soft Supercars tyre come to fruition.

After a record-breaking debut at the Clipsal 500 in Adelaide with a new soft compound tyre three weeks ago, the Supercars will run the newly constructed Dunlop Sport Maxx Super-Soft tyre for their four 13-lap races.

While the event is not for championship points, it will be a vital hitout before the next round of the Virgin Australian Supercar Series at Symmons Plains in Tasmania on April 7-9, where the Dunlop Super-Soft will be used in championship conditions for the first time.

The supercars will have a 30-minute practice session at 1250 this afternoon where they will use tyres from their allocated practice batch of 16 tyres for the season.

They will then have one set of tyres for each of the four 13-lap (30 minute) races, Friday through Sunday.

Each set of those tyres will also need to be used in the four corresponding back-to-back 10-minute qualifying sessions from 1700 this afternoon.

“Everyone is predicting some quick times from these new F1 cars, but I think there will also be plenty to talk about in the Supercars paddock,” said Dunlop’s Supercar Operations Manager Kevin Fitzsimons.

“Weather permitting, I think track records will be under threat everywhere we go this season and that will definitely be the case at Albert Park.

“The Dunlop Sport Maxx super soft is a bit of an unknown with the new construction, but everything points towards the Albert park records being under threat.

“Some teams might push the envelope a little more given that it’s not a championship round and that can be a good or bad thing, depending on which bit of the envelope they push.

“Everyone will be wanting to learn as much as they can as quickly as they can this weekend.”

Early indications following a pre-season tyre test at Sydney Motorsport Park promised a faster tyre, which was backed up by practice/qualifying and race lap records smashed at Clipsal.

Utilising the soft compound tyres, Shane van Gisbergen broke the qualifying record on two occasions lowering the benchmark to 1:19.2951, which was 0.4s under the previous record set by Scott McLaughlin last season.

Supercars will be on track from 1250 local time with live updates of all Supercars and Formula 1 sessions on Speedcafe.com over the next four days.