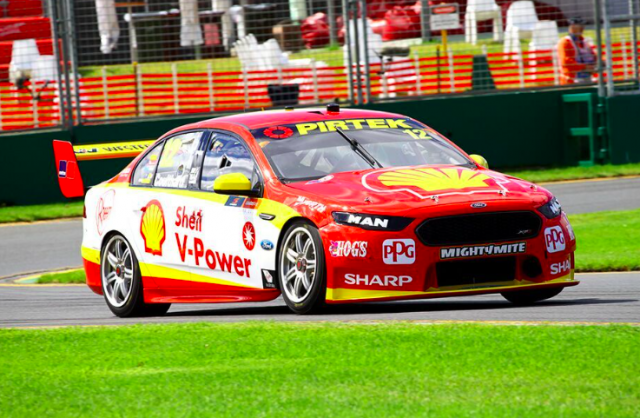 Fabian Coulthard has slashed the Supercars qualifying record as he and Scott McLaughlin locked out the front row for Races 1 and 2 at Albert Park.

Utilising the new Dunlop super-soft tyres, Coulthard qualified on pole for both races, while Jamie Whincup recovered from his practice doldrums to qualify third and fourth, respectively.

Coulthard laid down a 1:54.39s lap, while his team-mate Scott McLaughlin drove around Albert Park in 1:54.64s.

While many of the initial front-runners opted for only one flying lap, Tim Slade moved up to third with a second attempt, albeit 0.4s adrift of the Shell V-Power Falcons.

Lee Holdsworth pulled off with smoke coming from his Preston Hire Commodore and was left in 25th, while Nick Percat didn’t make it beyond pit exit with suspected engine issues.

DJRTP repeated the feat in qualifying for Race 2, though not as emphatically.

Coulthard was the only man to lap in the 1:54s this time around, with McLaughlin 0.1s adrift.

Jamie Whincup this time made a second attempt at a flying lap, elevating the #88 Red Bull HRT Commodore to third in the process.

Neither Holdsworth nor Percat reappeared, while James Courtney did not set a lap time in his Mobil 1 HSV Racing Commodore.