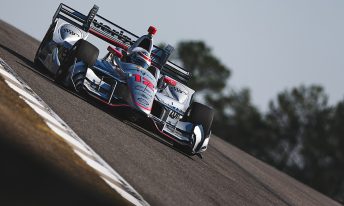 Will Power has set the fastest time in a highly competitive day of IndyCar testing at Barber Motorsport Park.

Power topped the 22-car field which took to the Alabama venue, with the top 14 drivers separated by less than 0.5s on combined times after the two sessions.

The Australian bumped Max Chilton from top spot in the in the dying seconds of the day with a 1:07.75s lap, finishing top by less than 0.01s.

Chilton remained second in his Chip Ganassi Honda, while Josef Newgarden and the man who he replaced, Juan Pablo Montoya, made for a Team Penske one-three-four.

Montoya was driving an IndyCar for the first time since the 2016 finale in September.

“It just shows how tight it is between Honda and Chevy now,” Power said.

“It’s tough, man. We just went through a bunch of stuff (during the test day) to see what it does and I think we got some good answers here.

“I think we’ve got a good car for here, I feel good about my setup.”

Round 2 will be held at Long Beach on April 9.