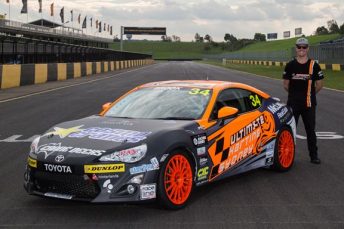 Tim Brook will reunite with his Formula Vee title-winning crew for the 2017 Toyota 86 Racing Series.

“I’ve got David and Jason Cutts helping me this year,” the 30-year-old explained.

“David helped me win my first State Championship in Formula Vee back in 2013.

“Then, jumping in the new Jacer for 2014 and 2015, we won an Australian title together, so it’s good to continue that relationship.”

Brook will continue to be backed by car owner Ultimate Karting Sydney, and hopes to build on a 2016 in which he scored four podiums among 11 top five results.

“We had a strong year last year. We’ll just try and keep the top fives rolling and obviously that first win wouldn’t go astray either,” he added.

The five-round series begins at the Phillip Island Super Sprint from April 21-23.