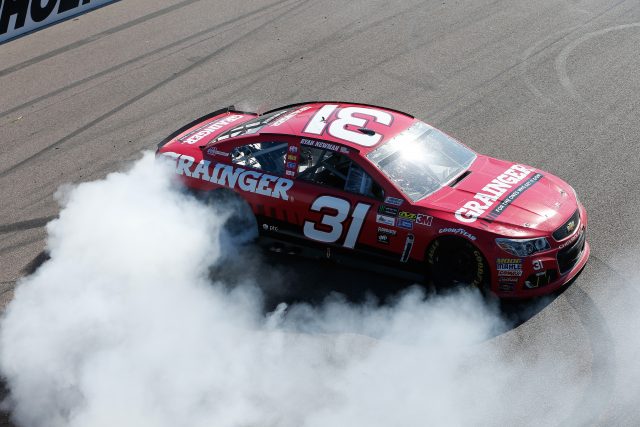 A late race tyre gamble paid off for Richard Childress Racing’s Ryan Newman who claimed victory in the Camping World 500 round of the Monster Energy NASCAR Series at Phoenix Raceway.

The majority of the field went to pit lane after Team Penske’s Joey Logano had a front right tyre blow out with 12 laps to go and hit the fence.

Newman, Ricky Stenhouse Jr and Martin Truex Jr all elected to stay out on track while the remainder of the field took two tyres for the run to the flag.

On the restart Newman raced away to a comfortable lead to leave the rest of the field fighting over the scraps.

Newman started the day at odds of 45/1 with the victory his first in 112 starts.

“I can’t remember that last one it has been that long,” said Newman.

“I was a gutsy call from (Crew Chief) Luke. I wanted two tyres and we went for none.

“We kept out of trouble all day and managed to get it done.

It was a tough result for Larson who was slow on the re-start and had to settle for his third consecutive second-place finish.

The podium result was enough to give him the lead in the championship after four rounds.

“This one stings because I thought I was in the best position of everyone on the restart,” said Larson.

“It is cool to be the points leader at the end of this one. That was our goal coming in here.”

The ongoing battle between Busch and Logano continued indirectly following a crash from the latter.

Busch had dominated the last part of the race after winning the race off pit lane on the third last stop and his Toyota was enjoying the clean air at the head of the field.

The crash by Logano stole the lead away from him, but some solid scrambling on the green-white restart gave him third place.

“Everything is great. We were strong all day and awesome there at the end,” said Busch.

“I got out the front thanks to my pit crew and I am proud of our overall efforts today.”

Logano was classified in 31st place, seven laps down after being one of several drivers who had problems with loading on the front right.

The group included Matt Kenseth who walked away from a big hit in hit Tide-backed Toyota 124 laps from home.

Logano started from the pole and held off a fast-charging Larson to lead all but one of the 75 laps in the opening stage to win stage one and earn 10 championship points and one playoff point.

“Not much you can do when the right front blows out and you have a wall pointing at you,” said Logano of his crash.

“We had good car at the beginning of the race and it went off. We need to figure out how to get faster over the long run.”

Chase Elliott went three wide to grab the lead less than 10 laps into stage two and was ahead at Lap 150 to give Chevrolet its first stage win for the season and earn 10 championship points and a point for the 10-race “race for the chase”.

The championship heads to Fontana, California this weekend for the Auto Club 400.