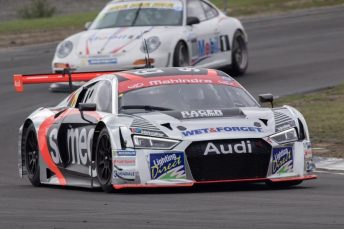 Rollinson got the jump and pulled away to a one-lap lead before Evans took over just beyond the 75-minute mark.

Evans pitted again with a half-hour remaining before going on to take a comfortable victory in a race which ran green for the duration.

“Gene did a great first stint and got to the lead and held it.

“I’m very happy to win this year; it’s really a once in a lifetime thing to win two New Zealand titles in two weekends so naturally everyone is thrilled.”

Behind the Camaro, Trass Family Motorsport battled throughout the race but was ultimately rewarded with a podium finish.

Sam Fillmore spun the Ferrari 458 on the opening lap before his recovery was ruined by a pit lane penalty.

However, strong drives from Danny Stutterd, who was recently confirmed as the driver of Steven Richards Motorsport’s second BMW in Australian GT, and Dunlop Super2 driver Richard Muscat saw the team take third.

Championship winners Evans and Rollinson will now move onto the North Island Endurance Championship, held over three races from May to July, ahead of a planned campaign at next year’s Bathurst 12 Hour.

Next Story Bruce McLaren inducted into Indy Hall of Fame