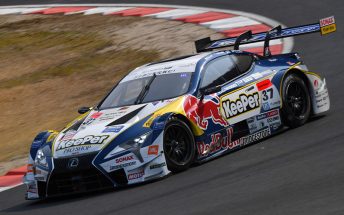 New Zealand’s Nick Cassidy has set the fastest time in Day 2 of pre-season testing for the Japanese Super GT series at Okayama.

Driving the new LC500 for Lexus Team KeePer TOM, Cassidy lapped the 3.7km circuit in 1:18.395s during the morning session, leaving him a tenth of a second clear of his nearest rivals.

With the day divided into a pair of two-hour sessions, most teams ran longer runs during the afternoon as they chased race set-ups in the warmer conditions.

“It was a really promising test for us,” said Cassidy.

“With the LC 500 being new, we are continuously learning and developing the car and selecting the best tyres.” Cassidy’s compatriot Jono Lester enjoyed a productive weekend as he embarks on a full season in the championship’s GT300 class.

The Gulf Racing Porsche driver, who is partnered with Japanese Kyosuke Mineo, was fourth-fastest in class in the afternoon session and fifth for the day.

“With steady improvements made in every run, we finished the final of four 2hr sessions in 4th place, just two tenths of a second shy of the top spot,” commented Lester.

“This gave everyone a massive boost in self-confidence ahead of round one of the season, back at the same circuit, in three weeks’ time.”

Another official test will be held this weekend at Fuji Speedway on March 25-26 before the championship returns to Okayama International Circuit for the opening round on April 8-9.