The Konica Minolta Cadillac DPi-V.R has won the 12 Hours of Sebring

The #10 Cadillac of Ricky Taylor/Jordan Taylor/Alexander Lynn has claimed outright and Prototype honours in the Sebring 12 Hours.

Jordan Taylor passed Albuquerque for the lead inside the final three hours after the Portuguese was held up by the #33 Mercedes which would go on to win the GTD class.

Ricky Taylor brought the #10 Cadillac home, staying in front due to a shorter pit stop with just over an hour remaining before eking away from the #5 Cadillac, by that time in the hands of Barbosa.

The #31 entry had led before a spin in the third hour after contact with the #22 Extreme Speed Motorsport Nissan as Johannes van Overbrook attempted to enter the pits.

The factory Cadillac lost four laps as a result, the car needing to be towed to pit lane to be restarted.

Car #22, qualified by Kiwi Brendon Hartley and also driven by Bruno Senna and Ed Brown, would retire with mechanical issues before halfway.

Pole-sitters Rebellion Racing were not a factor after the #13 Oreca of Sebastien Buemi/Nick Heidfeld/Neel Jani was plagued by electrical problems for much of the race.

In the other classes, Performance Tech Motorsports took out Protoype Challenge with a fifth placing for James French/Patricio O’Ward/Kyle Masson

The GTLM battle was marked by drama at the start and finish.

The pole-sitting Ganassi Ford GT of Australian Ryan Briscoe, Kiwi Scott Dixon, and Briton Richard Westbrook actually started at the rear of the field after mechanical issues on the grid.

After the final caution, with just over an hour remaining, Garcia led in the #3 Corvette but looked set to be run down by Patrick Pilet in the #911 Porsche.

Pilet was already recovering from a poor pit stop in the 11th hour but luck deserted him again as a puncture ended his hopes of a class victory.

“To get spun out of the podium on the very last lap is pretty disappointing to be honest,” said Briscoe.

“We had a great car all day and were really in the fight for it. It was just flat-out all 12 hours here at Sebring. We just missed having the winning balance today but we’ll hang in there and learn from this.”

There was disappointment for Shane van Gisbergen when the Riley Motorsports Mercedes suffered broken steering in the fifth hour while in the hands of Cooper MacNeil. 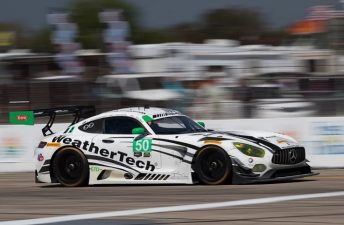 van Gisbergen was as high as third in class

“We thought it might have been tire pressures. But, it turned out it was something more. It’s a shame. Two bad races, two DNFs. But, we had a strong car and three strong drivers. We’ll try again next time.”

The Supercars champion had run as high as third in car #50, which he had also shared with Gunnar Jeannette.

“From my end, the car was decent,” van Gisbergen said.

“The car had no problems. I was able to push the whole way and we got up to second. But, what a shame [the way the day ended]. What could have been?”

Australian Kenny Habul finished third in GTD in the Mercedes he shared with Boris Said and Tristan Vautier.