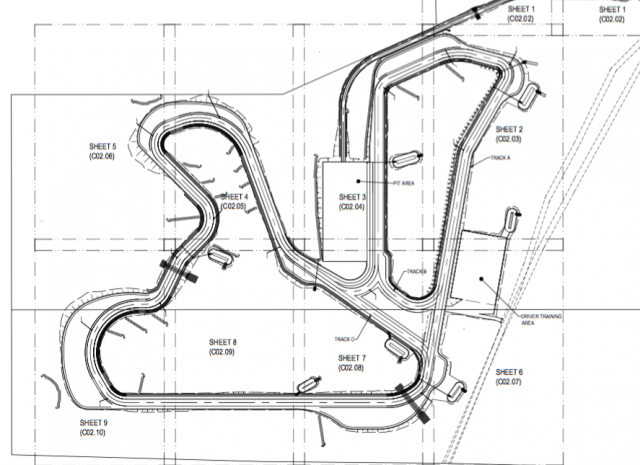 The layout of the new Circuit Italia

Construction of a brand new multi-million dollar permanent motor racing complex near Newcastle is set to begin next month.

Built to FIA Grade 2 specifications, the 14 corner circuit, which will feature 40 metres of elevation change, will be eligible to host all motor racing categories except Formula 1.

Originally tabled in 2013, the project has received local council approval and is set to award a construction contract this month, with the building process scheduled to begin in April.

It is hoped the privately funded venue, which is named after the Italia Road it is constructed on, will be ready to host competitive motorsport early next year.

Circuit Italia is the latest new circuit project to begin construction in Australia, following in the footsteps of The Bend Motorsport Park in South Australia.

Circuit staff hope the venue will capitalise on a catchment area that includes 10,000 CAMS license holders and a likely increase in motorsport interest, created by the new Coates Hire Newcastle 500 Supercars season finale.

Race events are yet to be secured although Higgins met with Supercars officials in 2015 to discuss his plans for the circuit.

Circuit Italia has recently recruited from Supercars director of sport Damien White to head up the commercial and marketing side of the business.

White has recently held roles at The Bend Motorsport Park and was working on the redevelopment of Queensland Raceway before resigning from the role earlier this year.

“This is a circuit that has funding and the council’s approval,” White told Speedcafe.com.

“The designs are done and this is something that is ready to go and about to start.

“For me having been involved in motorsport for most of my life, the most exciting thing is the rise and fall of this circuit.

“It has the ability to host everything other than Formula 1 with regards to its configuration and safety aspects.

“Despite the lack of new facilities, the amount of circuit users has increased.

“Queensland Raceway is the next circuit north of Circuit Italia, while Sydney Motorsport Park is the next venue south, so there is a big catchment area.

“In terms of construction time it is as many as 50 weeks and as little as 30 weeks depending on the need for it to be completed.”

The venue has the full support of the Confederation of Australian Motorsport assisting Higgins and his team for the last two years in getting the project off the ground.

“We have been out to his track site. Bruce Keys (CAMS Manager of Track Safety) has offered advice and information and I have assisted Matt with advice,” CAMS CEO Eugene Arocca told Speedcafe.com.

“We introduced him to the sports minister of New South Wales, Stuart Ayres, at Sydney Motorsport Park in 2015.

“He is very keen to get this track up and we think the demographic and the catchment area for this track will be outstanding.

“We think Supercars coming to Newcastle will be an advantage for him as it will create more interest in motorsport.

“Once they pack up the street circuit people need to be able to go and race somewhere else.

“We believe he (Matt) is determined, willing and has done everything to get this track off the ground.

“I always felt that Matt would get there and we will help him every step of the way.”