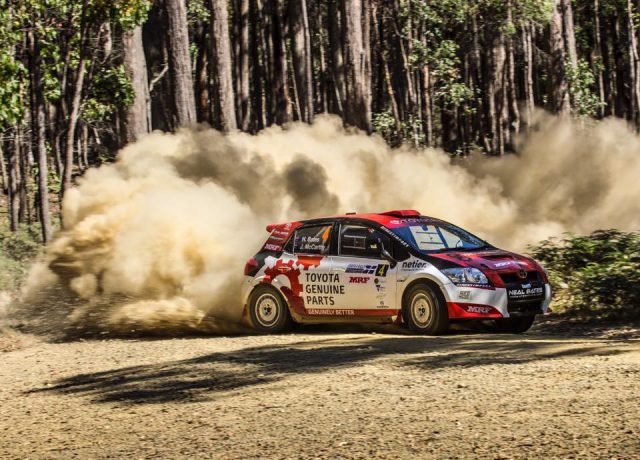 After a day where his brother had his car destroyed in a fire, no such dramas for Harry Bates who stormed through the afternoon stages to win the opening heat of the Australian Rally Championship, at the Eureka Rally outside Ballarat.

After a seesawing battle that raged throughout the day, Bates outlasted Nathan Quinn to win by 14.8sec after 120km of competitive stages.

When the pair left the lunch time service, Quinn was in the lead by 6.2 seconds. But as the afternoon warmed up to the predicted 30 degrees, Bates and Quinn swapped fastest stages times in the first four of the afternoon five stages with honours at two stages apiece.

The final stage for the Heat (special stage 11) was pivotal, with Quinn suffering a mechanical problem that slowed his pace, so that he only finished seventh in the stage, so that Bates escaped with the heat win.

“The win feels amazing and is the perfect start to the season. The whole team has made a huge effort over the break and this win is a reward for everyone’s hard work.” Bates said.

The tussle for the third-place points between local Aaron Windus and triple Australian champion Eli Evans was just as fierce that was ultimately resolved in the favour of Windus.

Evans won the opening two stages after lunch but a mysterious electrical gremlin slowed the Peugeot 208 Maxi on special stage 9, allowing Windus to take a one minute advantage and hang on to the end, despite a last-ditch effort by Evans as he won the final special stage.

Further down the field. Australian champion Molly Taylor battled on to finish seventh outright and score valuable point towards her championship defence.

A vibration in the front differential indicated a possible gearbox issue in the morning stages.

The Les Walkden Rallying crew changed the Subaru’s gearbox, but it took longer than the 30-minute service and that meant a two-minute penalty.

“It’s disappointing to have these things happen so early in the rally, but the LWR crew did a great job to turn the gearbox change around so quickly,” said Taylor.

“This is a new rally, in a new car and the dust has certainly played a big part – but we’ll literally dust ourselves off and be back tomorrow.”

The sheet is wiped clean tonight and all the surviving competitors will start tomorrow morning to see who secures the points in Heat 2 of the event.