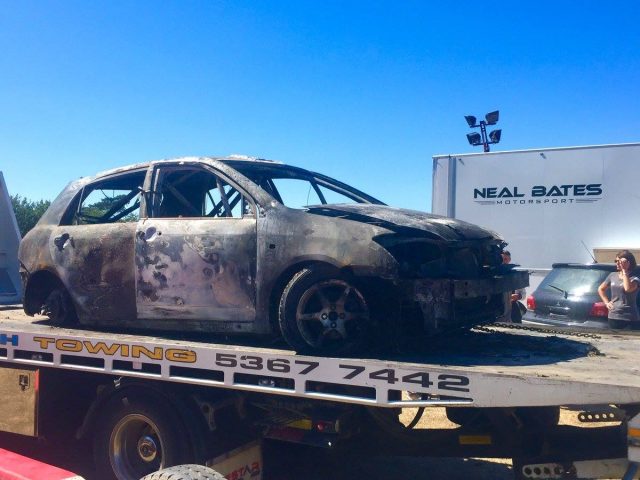 Lewis Bates, the youngest son of four-time Australian Rally Champion Neal Bates, has watched his Toyota Corolla burn to the ground at the Eureka Rally outside of Ballarat.

Making his ARC debut, Bates and co-driver Antony McLaughlin could only watch on after what appeared to be a minor incident.

The brother of Harry Bates, slid wide on a corner and beached the car on a gravel bank.

The heat from the exhaust ignited the tinder dry undergrowth and the ensuing fire destroyed the car.

“To say I am devastated would be an understatement,” said Bates.

“We ran wide onto some loose gravel and the car got stuck on a dirt mound about one metre off the road. We spent two minutes trying to get the car out before a fire started underneath the car. We tried everything to put the fire out but were unsuccessful and the Corolla burnt to the ground.

“A big thanks to Brendan Reeves and Ben Searcy, all other crews and officials who did everything they could to help assist.”

The stage was stopped as fire crews entered the stage to extinguish the fire and ensure a larger bush fire wasn’t caused.

Midway through the leg of the opening round of the CAMS Australian Rally Championship the top-three are separated by just 16.3sec.

Local driver Aaron Windus’s run in a borrowed car has been outstanding and he is currently in fourth place.

Defending series champion, Molly Taylor, had a fraught morning battling an issue with a differential and was two-minutes off the lead.

Competitors face a second pass over the same stages this afternoon.