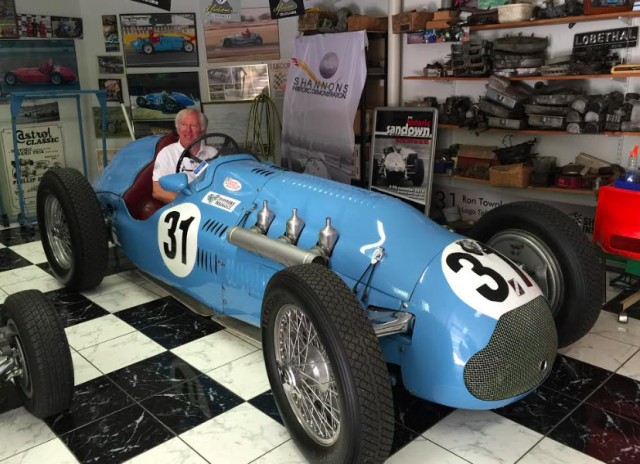 Vern Schuppan at the wheel of the Talbot-Lago

Australian motor racing legend Vern Schuppan will face another ‘first’ in his long and successful career when he races his own 1948 Talbot-Lago T26C Grand Prix car at this weekend’s Phillip Island Classic.

For Schuppan, who has his extensive and impressive career CV headlined by a victory in the 1983 Le Mans 24 hour in a Porsche 956, it will be a boyhood dream come true when he gets behind the wheel of the post-war French racer.

It is believed there were only 23 Talbot-Lago racers built and, like Schuppan, the car not only had grand prix consistency, but also a Le-Mans 24 hour victory in 1950.

“I had my first run in the car yesterday and the first time out I was slightly horrified,” Schuppan admitted to Speedcafe.com.

“The second time out we had sorted the tyre pressures and it was much more enjoyable.

“In the first session I think I was running on about half an inch of rubber going down the straight.

While many racing enthusiasts have their favourite or most memorable race cars, not many actually have the chance to own them.

Schuppan, who was born on Booleroo Centre and raised in Whyalla South Australia, travelled with his parents and sister Patrea for more than four hours in a Vanguard to attend the 1955 Australian Grand Prix at Port Wakefield.

“The 1955 Australian Grand Prix at Port Wakefield was my first ever motor racing event,”said Schuppan.

“Jack Brabham won the race from Reg Hunt, but I always had a fascination with the Talbot-Lago which Doug Whiteford drove to third place.

“There was just something about the car that has stuck with me all these years.

“Dad actually shot the race on an 8mm camera and I still have the footage.”

Whiteford also contested the 1956 Australian Grand Prix at Albert Park in the car and finished eighth in the 22-car field behind the works Maseratis 250Fs of Stirling Moss and Jean Behra after overheating problems crushed his chances.

Schuppan’s car had its debut in the 1948 San Marino Grand Prix and ran in Europe until being shipped to Australia for the 1955 season.

On debut at the 1955 Argus Trophy race at Albert Park Whiteford beat Stan Jones, the father of future world champion Alan Jones, to the chequered flag.

The race, which was open to Formula Libre Racing Cars, was contested over 32 laps, a distance of 100 miles (160km).

It was organised by the Light Car Club of Australia and sponsored by The Argus, a Melbourne newspaper.

The car actually ran in the Bathurst 100 as part of the Australian Drivers’ Championship in 1957 at the hands of Ralph Snodgrass, who finished third behind Arnold Glass (HWM-Jaguar) and Jack Robinson (JRS-Jaguar).

It has its last start at Sydney’s old Mount Druitt track later that year and did not officially race again until an historics meeting at Sandown International Raceway in 1985, after being totally restored by Reg Hunt.

The car was most recently owned by long-time racer and enthusiast Ron Townley, who will also be competing in another of his vehicles this weekend despite his 80-plus years.

“I always loved seeing the car at Phillip Island or Albert Park and always made a point of going and talking to Ron and looking over the car,” said Schuppan.

“At Phillip Island last year I was told the car was for sale and I knew I had to do a deal.

“There were a lot of guys from the UK and other parts of the world and the last thing we needed was this car heading back to Europe after being here all its life.

“We cut and deal and here we are.

“It is really cool and I have to pinch myself when I think about personally owning this car.”

Schuppan, 73 himself, said this weekend was not about breaking track records.

“The last thing I want to be doing is racing old grand prix cars, this is about having some fun and people having the chance to see the car,” said Schuppan.

“I was fortunate that Ron (Townley) was keen to see the car pass on to someone in Australia after having it for 10 years or so.

“He is a real character of the sport and we have become good friends. I am sure he will be around this weekend if I have any questions.”

Schuppan will take part in  practice and qualifying today before a couple of runs tomorrow and one on Sunday.

This weekend’s event has attracted more than 500 entries and will be highlighted by event Patron John Bowe in an Volvo 240T that raced to the Australian Touring Car Championship title in 1986.

Dick Johnson was originally to be the patron, but had to hand over duties to his former DJR teammate because of international commitments.