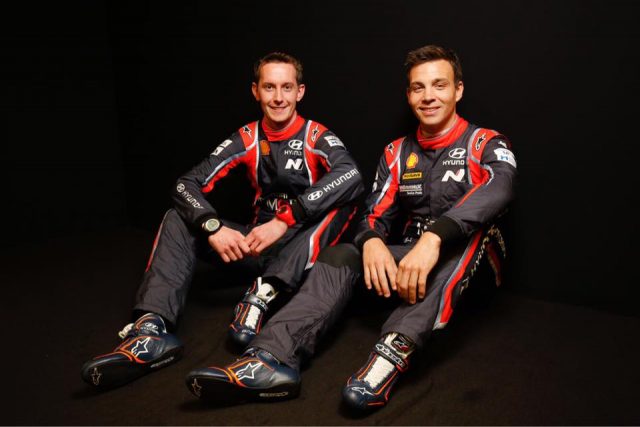 Straight after last weekend’s Rally Mexico it was confirmed that fellow Kiwi John Kennard would be retiring from the sport after Rally Finland in late July.

Kennard had worked with Paddon for 12 years.

Marshall will take over for the final four rounds of the WRC season, beginning with ADAC Rallye Deutschland (17 – 20 August)

The 27-year-old has sat beside a wide range of drivers including Australia’s Molly Taylor during her European tenure.

He co-drove with Kevin Abbring in 2014 in the European Championship. The pair joined Hyundai Motorsport in 2015 but Marshall stepped down as the co-driver at the start of this season.

As part of getting acquainted in competition Paddon will contest Rallye Sanremo in a New Generation i20 R5.

The event will form part of Hayden’s preparations for the Tour de Corse, as he continues to improve his consistency on tarmac when he will be back about Hyundai i20 Coupe WRC.

Marshall has experience of the New Generation i20 R5, having worked with the Customer Racing department throughout the development phase of the project last year.

“The whole purpose of the rally is just to get more time behind the wheel and to get more comfortable on tarmac,” said Paddon.

“With Seb sitting in the car with me, it’s also a chance for us develop our partnership with an eye on the future.”

“It’ll be my first time at Rallye Sanremo and I’m really looking forward to it. Competing the week before the Tour de Corse should be the perfect warmup for that event.

“It will be a good opportunity to get some more mileage on tarmac on very twisty and demanding roads that are similar to Corsica.”