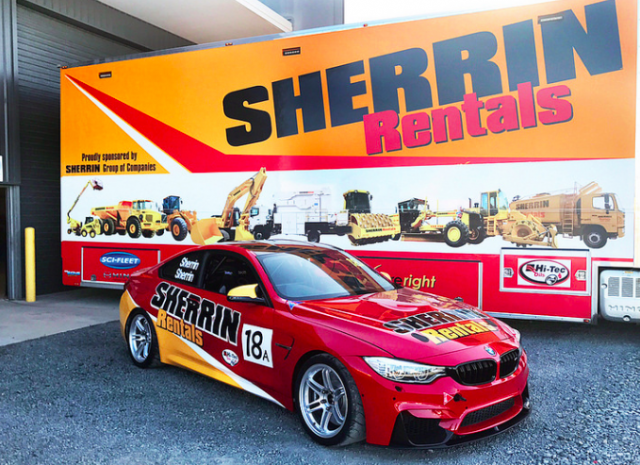 The Sherrin Racing Team will debut a brand new BMW M4 in the Australian Production Car Series this year.

The squad will move to Class A with the new M4 after dominating Class B for the last three seasons.

Brothers Grant and Iain Sherrin will campaign the car which will replace the title winning #18 Sherrin Racing BMW135i.

The car will make its competitive debut at the Hi-Tec Oils Bathurst 6 Hour held at Mount Panorama from April 14-16.

“The two Sherrin Racing BMW135is were no doubt still successful, but we were keen to give ourselves a makeover and make our move to Class A,” said team boss Michael Sherrin.

“After taking an extensive look at the other makes, we chose to stay with BMW and in doing so, the obvious choice was to go with the M4.

“My sons Grant and Iain – the reigning Class B champions and the 2015 outright champs – will be driving the M4 at all rounds of the APC this year, kicking off with the Hi-Tec Oils Bathurst 6 Hour.

“We have sold the championship-winning #18, and David Ayres and I may do a round here or there in the #19 Sherrin Racing BMW135i, but I will be spending most of my time managing the team across 2017.

“Iain, David and I found ourselves on the podium of last year’s inaugural Hi-Tec Oils Bathurst 6 Hour, so we are pretty confident that with our new weapon we can find ourselves there again.”

Next Story Last tickets released for Hall of Fame dinner