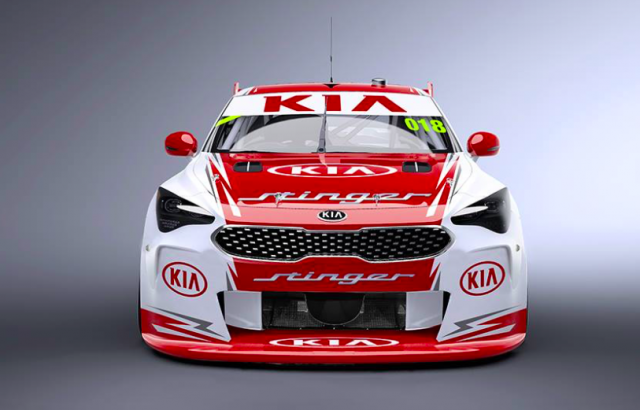 A render of a Kia Stinger Supercar produced by ssMedia

Kia Motors Australia says it has no plans to pursue a move to join the Virgin Australia Supercars Championship.

The Korean manufacturer emerged late last year as a potential contender to join the category with its new Stinger sedan, which is due to be launched later this year.

Kia has confirmed to Speedcafe.com that two Supercars team have approached the manufacturer expressing an interest in forming an alliance with the brand.

However, discussions have not progressed any further with the marque reaffirming it currently has no plans to embark on any motorsport programs in Australia.

Supercars will move into the new Gen2 era next year with Holden and Nissan the only marques to commit to the regulations currently.

The new rules will allow two-door body shapes and non V8 engines into the series.

“We are not chasing anything in motorsport,” Kevin Hepworth (General Manager – Media & Corporate Communications) from Kia Motors Australia told Speedcafe.com.

“We have talked to a couple teams that have approached us as a courtesy, but really it has gone no further than that.

“We have had interest in the Stinger and we have listened politely but there is no steps behind that.”

Interest in Kia joining the category has been sparked among fans following the release of renders illustrating how a Stinger Supercar may look if the manufacturer was to join Australia’s premier series.

Hepworth admitted the company is aware of the interest in both the car and the category, but its stance on motorsport remains unchanged.

“We know there is a lot of interest in the car but it doesn’t change our position on Supercars and motorsport in general,” the spokesman added.

The manufacturer is currently represented in the Chinese Touring Car Championship, where it claimed the constructors’ title last year.

The marque appears keen to expand into European motorsport having secured an association with the STARD operation, which has created a bespoke Kia Cee’d for competition in the growing TCR touring car class.